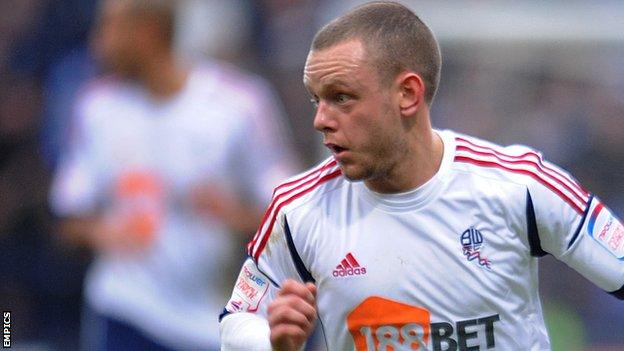 Manager Dougie Freedman has said he will do everything within his power to make Liverpool midfielder Jay Spearing a Bolton player on a permanent basis.

The 24-year-old, who last season, is free to leave Anfield.

After Freedman is keen to do a deal.

"Jay is a fantastic player, our player of the season, and available," he told BBC Radio Manchester. "We'll try our very best to make it happen."

Around 2,500 travelling supporters called for Freedman to re-sign Spearing as Bolton began the Championship campaign with a 1-1 draw at Burnley on Saturday, while 96% of Bolton fans taking part in a recent local newspaper poll voted in favour of a move for their former loanee.

However, while Freedman would like to take Spearing back to the Reebok Stadium, he says the financial aspect of the transfer must be right for the club.

"We've got Financial Fair Play and I've got a responsibility to this football club," he continued.

"We've done very well with free transfers. If somebody like Jay comes up and the deal is right for the football club, then yes, we will be looking at that."

Bolton added free agents such as Alex Baptiste and Marc Tierney to their squad during the summer, while the only substantial fee they have paid for a player was for Leicester striker Jermaine Beckford.