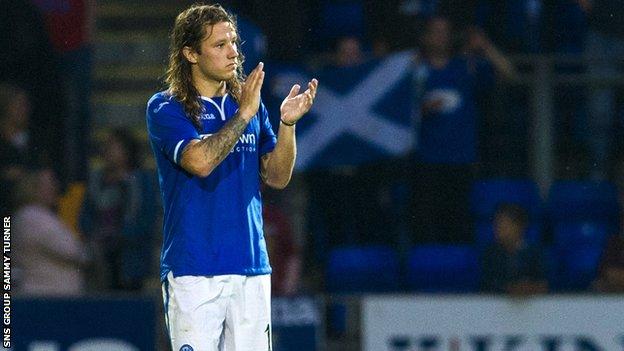 Stevie May has been rewarded for his good St Johnstone form with a call up to the Scotland U21 squad for next week's friendly against England.

Celtic defender Stuart Findlay, 17, is the youngest member of the pool.

Fifty goals in just 73 games as a professional have earned May, 20, a chance to impress against England at Bramall Lane on 13 August.

You can see by the type of goals that he scores that he is usually on the move.

May returned to St Johnstone this summer after spending the last 18 months on loan to Alloa and Hamilton, scoring 19 goals for the Wasps and adding another 26 in the First Division for Accies.

But it has been strikes against Saints' Europa League opponents Rosenborg as well as Hearts during the opening weekend of the Scottish Premiership that has convinced Stark he cannot afford to leave May on the sidelines any longer.

"I've been watching Stevie for a number of years as I do with all the young ones," said Stark.

"His form and goalscoring right now is too good to ignore.

"He is confident and is born in 1992, so is one of the more experienced ones in the group. Put all those things together and that is a nice mix for this game.

"He is busy and works hard. He's got a hunger to score, which is really important. You can see by the type of goals that he scores that he is usually on the move.

"The lob that he scored against Rosenborg showed he has that goalscorers instinct. He waited for the hesitation from the goalkeeper and defender and managed to get a toe to it.

"He took his one against Hearts early and non-one was expecting that. Those are both good qualities to have as a striker."