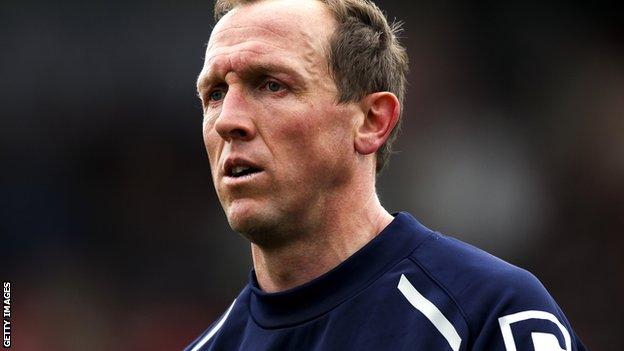 Manager Andy Morrell is still hopeful he can add a couple of new players to his squad before Wrexham start the new Conference Premier season on Saturday.

Wrexham have so far signed only striker Andy Bishop and winger Theo Bailey-Jones.

Morrell wants to strengthen his squad before the opening game against Welling United, with a centre-half the priority.

"We will be trying. But deals are not easy to come by," Morrell said.

"But what we do know is lads stopped getting paid on 1 August that had contracts last year.

"This is when they start not getting paid and reality hits home if you haven't got a club by this point.

"I've spoken to a couple that haven't been in the situation before and they're starting to get worried.

"There's not a lot out there. Teams have got squads already and it's just injuries or places to fill.

"There's not many spots but we're definitely in need of a couple if we can. We'll see what we can do."

The Wrexham manager is keen to sign a centre-half with Mark Creighton a fitness doubt ahead of Saturday's opening game against newly promoted Welling United.

Morrell has been in talks with Cameroon-born defender Junior N'Tame, who featured for the Dragons during pre-season, but negotiations have stalled.

"It's not ideal going into the last game of pre-season with one fit centre-half," Morrell added.

"We've spoken to a couple and we'll continue to speak.

"He [N'Tame] is a name on the list so we will see if there is anything we can rekindle in that but it is not and easy one to do."

The Dragons concluded their pre-season campaign with a 1-0 home defeat to Premier League side Stoke City, managed by Wrexham-born Mark Hughes.

Morrell was happy with his team's performance against a strong Stoke City side which included the likes of Peter Crouch, Ryan Shawcross and Jermaine Pennant

"I was pleased by our attitude and how we worked when we didn't have the ball," Morrell said.

"It was good for us and they were ideal opposition, really good players and the chance to pit your wits against a Premiership team is fantastic. I think we did ourselves tremendous credit."