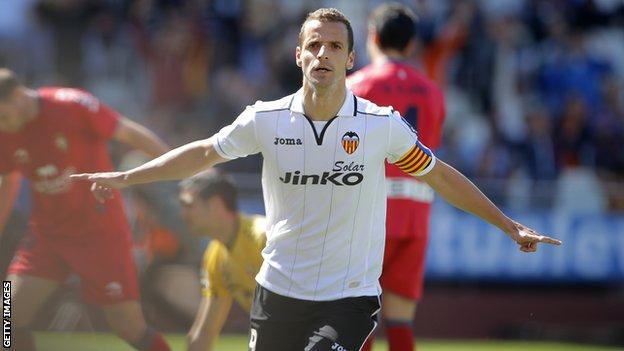 The 28-year-old has signed a four-year contract after passing a medical and becomes Spurs' third summer signing.

Soldado has 11 caps for Spain and scored 30 goals in 46 appearances for Valencia last season.

Soldado helped Spain reach the final of the Confederations Cup last month, scoring in the group win over Uruguay. He was an unused substitute in the final as Spain lost 3-0 to hosts Brazil.

A Spurs statement said: "We are delighted to confirm the signing of Roberto Soldado from Valencia after he successfully completed his medical."

Soldado is expected to be available for Tottenham's final pre-season friendly, which is against Espanyol at White Hart Lane on Saturday.

The club's previous transfer record was the signing of midfielder Paulinho from Corinthians for nearly £17m earlier this summer. Spurs have also added winger Nacer Chadli from FC Twente for a fee thought to be around £7m.

Soldado was born in Valencia but began his career at Real Madrid, scoring 63 goals in 120 league appearances for their B side, Real Madrid Castilla.

He joined his hometown club three years ago after a spell at Getafe and went on to score 80 goals in 146 appearances for Valencia.

Soldado has also become an established member of the Spanish national squad and helped his country to the runners-up spot at this summer's Confederations Cup.

His arrival will boost an attack that has only Jermain Defoe and Emmanuel Adebayor as recognised first-team centre-forwards.