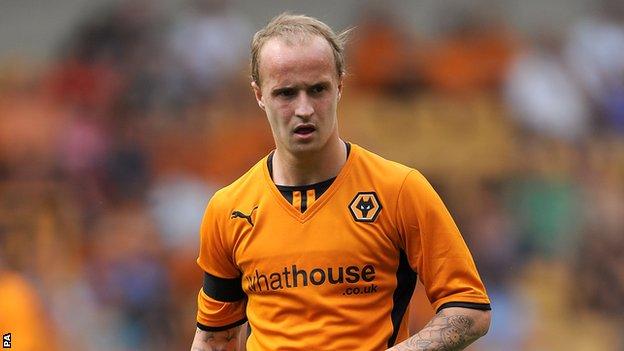 Wolves boss Kenny Jackett has said the club are in talks with Leigh Griffiths and Danny Batth over new contracts.

Striker Griffiths, 22, signed a one-year extension at Molineux this summer after scoring 28 times on loan at Hibernian last season.

And defender Batth, also 22, also has one year left on his Molineux deal.

"Both are in negotiations and have been offered new contracts, but nothing has been signed yet," Jackett told the club website after the 0-0 draw at Preston.

"I think Danny is a terrific prospect at the back, and he had a very good first game against [Preston forward] Kevin Davies.

"And Leigh, despite perhaps being a bit frustrated on Saturday and not getting the best of service, I think he always does look a threat."

This summer Wolves turned down a transfer bid from Hibs to take him back to Easter Road, and Jackett has stated that Griffiths would be "perfect" for Wolves as they embark on their first season in the third tier since 1989.

Following their stalemate at Deepdale on Saturday, Jackett said he wants to see more quality from his players.

"It was a typically frantic first day," he told BBC WM. "We were pleased with a clean sheet and a point away from home.

"We showed a lot of heart, and we are looking to build on that and show some quality on the ball.

"That's going to be our improvement going into these two games this week."