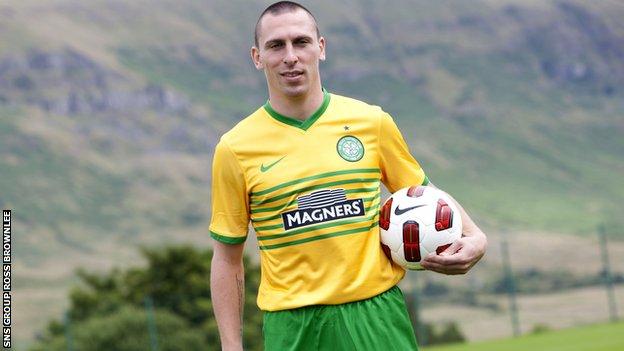 Captain Scott Brown is wary of Elfsborg's artificial pitch but is confident Celtic can handle it with their improving European away form.

Celtic go to Sweden defending a 1-0 lead in the third qualifying round of the Champions League.

"This is a club who can go away from home now and get a good result," said midfielder Brown.

"We have had a lot of games on astroturf in the last few seasons and are getting quite used to it."

And their first ever away win in the group phase came on the artificial turf in the Luzhniki Stadium, with a 3-2 win over Spartak Moscow.

"It's going to be hard, it's on astroturf," said Brown. "We have been training on astroturf for a few days trying to get our heads around it.

"We won't know what kind it is until we get there. But we are not worried."

Celtic's win in Moscow last season was their first group stage success on the road in 19 attempts, while only an injury-time strike denied Neil Lennon's team a point in the Nou Camp before beating Barcelona at home on their the way to a place in the last 16 of the competition.

"It was huge," Brown said. "I think it was hanging over everyone's head at Celtic, the players and supporters as well. We seemed to think we were never going to get there.

"It gives us confidence, especially away from home.

Having easily disposed of Cliftonville - who also use synthetic grass - in the previous round, Celtic found it tough to break down a resolute Elfsborg in Glasgow before a late header from Kris Commons gave them a precious lead.

"Elfsborg came out with a game plan at Celtic Park and they stuck to it," recalled Brown.

"They tried to defend and sneak a goal at the end hoping to get a draw so they could take us back to the astro-pitch. We did well on the night, though, and even though they were 16 games into their season we looked a lot fitter than them.

"We've not really had a long break so match fitness has caught up quite quickly. The lads look sharp in training as well as the games."