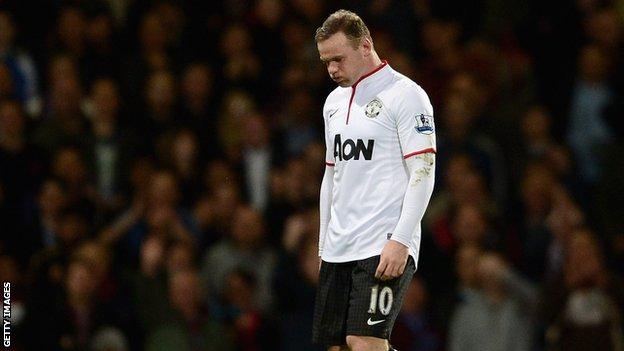 United say the striker is not for sale after rejecting a second Chelsea bid - of £25m plus add-ons - while Rooney is understood to be intent on leaving.

"If Wayne wants to go, then it is up to him to force that issue," said Blackpool manager Ince.

"But Wayne has not said he wants to go or wants to stay; it would be nice to know what Wayne Rooney wants."

Rooney, 27, has been left out of their squad for Tuesday's friendly in Stockholm with a shoulder injury.

Speculation has surrounded the England international's future since ex-United manager Sir Alex Ferguson stated in May that he had asked for a transfer.

That request - which sources close to the player insist did not occur - followed a season in which the player struggled for form and fitness, was usurped as main striker at the club by Robin van Persie and was dropped for the high-profile Champions League second round, second leg clash with Real Madrid.

Ferguson's successor, David Moyes, has continually stressed that Rooney is not for sale.

But that has not deterred Chelsea, who had an initial bid of about £20m turned down by United in July.

Rooney has won five Premier League titles, one Champions League and two League Cups since joining United from Everton for a deal worth up to £27m in 2004.

Ince - a combative midfielder who won 53 caps for England and played for several clubs including West Ham, Manchester United, Inter Milan and Liverpool - suggested that after nine trophy-laden campaigns at Old Trafford, Rooney could now be looking for a fresh start.

"I do know that there comes a stage where players get stale," he said following Blackpool's 1-0 Capital Cup defeat by Preston on Monday.

"When you look at most players who go to Man Utd, apart from the likes of Ryan Giggs and Paul Scholes, they have something like a six-year tenure and then they move on.

"Whether that is the case for Wayne, I don't know, but I do know that he needs to be playing football this season.