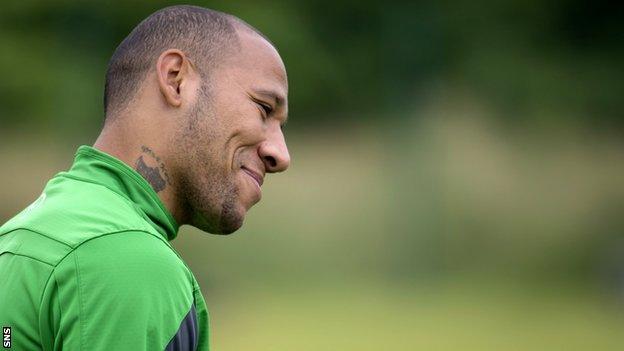 Celtic manager Neil Lennon is sure Kelvin Wilson will not let transfer talk distract him if the defender is fit to play against Elfsborg.

Nottingham Forest want to bring the 27-year-old back to the City Ground.

"He's quite calm, that's his demeanour," said Lennon ahead of the Champions League qualifier in Sweden.

"He's been magnificent for us, certainly in Europe, for the last 18 months. If he's ready to play, I'm sure he won't let us down."

Wilson missed Saturday's 2-1 opening league win over Ross County with a shin splints problem but should be fit for the second leg at the Boras Arena.

"He had a very good season last year and has started this season very well," continued Lennon.

"He's as important as some of the other players we have; [Georgios] Samaras, [Joe] Ledley, [Scott] Brown.

"He's aware of what we think of him.

"But I don't want to discuss any of my player's conditions or situations until after Wednesday night.

"My back four played very well in the Champions League group stages last year and gave us a platform to build on.

"There's a good partnership with Kelvin and Efe [Ambrose] and I don't see any reason to break that up just yet."

Earlier, assistant manager Johan Mjallby admitted Wilson may be suffering from homesickness but he too is not resigned to losing the defender.

"It's a long way to go yet," said Mjallby. "Obviously, we want to keep hold of him. He's really, really important for us.

"He knows there's the interest there. Maybe he's a wee bit homesick even if it's not a long way to go from Glasgow to Nottingham."