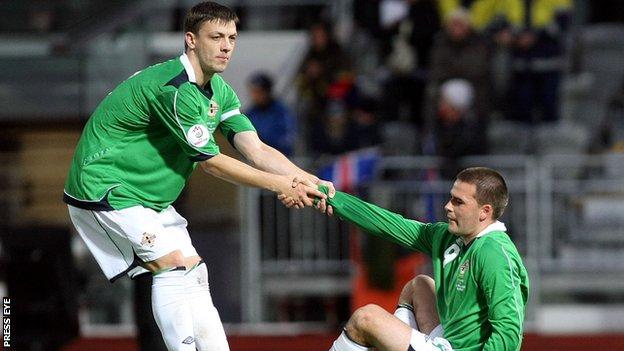 Northern Ireland manager Michael O'Neill has left out Chris Baird, David Healy and Pat McCourt from his squad for the World Cup qualifier against Russia on 14 August.

The trio are without clubs after being released from their previous employers at the end of last season.

Uncapped New York Red Bulls midfielder Jonny Steele is also missing despite speculation that he might be involved.

Steele is playing for the Bulls against Columbus Crew on Sunday.

O'Neill said last month that Steele would get his chance for Northern Ireland "soon" but added that his club commitments might rule him out of the re-arranged qualifier against the Russians.

The uncapped Larne man, 27, plays with Thierry Henry and Tim Cahill for the US club and has been having a fine season.

Palermo striker Kyle Lafferty returns to the squad for the Windsor Park game after missing the home defeat by Israel because of suspension.

There is also a recall for Derby County striker Jamie Ward but Sammy Clingan is ruled out by a knee injury while Chris Brunt is missing because of suspension.

Baird, 31, was released by Fulham at the end of last season and while he has been linked with a move to Queens Park Rangers, he has yet to sort out his immediate club future.

McCourt, 29, is currently training with Hibernian with a view to a short-term move after leaving Celtic in May while Healy is also searching for a club.

Healy, who celebrated his 34rd birthday on Monday, was released by Bury in May following their relegation to League Two.

The striker is Northern Ireland's record goal-scorer with 36 goals in his 94 international appearances.

With the time difference, we wouldn't have been able to get Jonny Steele here until Tuesday

O'Neill indicated on Tuesday Baird, Healy and McCourt would all be in contention for recalls once they secure deals with new clubs.

"It would be difficult to bring in players who haven't had a proper pre-season," O'Neill told BBC Sport Northern Ireland.

"It would be unrealistic to ask those players to have any sort of impact or influence on an international fixture.

"I've spoken all the players and I spoke to David (Healy) yesterday. I still think that he has something to offer.

"He knows last season was disappointing. He had injury problems and he was in a struggling team.

"Hopefully, he will get a better opportunity and better club this season."

O'Neill added that Steele's game in the US on Sunday night made a first international call-up "unrealistic" but the Larne man is part of the manager's plans.

"With the time difference, we wouldn't have been able to get Jonny here until Tuesday," continued the Northern Ireland boss.

"I had a good chat with Andy Roxburgh, the technical director at New York Red Bulls, and we both agreed that this was the wrong game to bring Jonny in."

Northern Ireland's hopes of qualification have already been extinguished after three draw and two defeats in their opening five Group G games.

O'Neill is still searching for his first victory since being appointed as Northern Ireland boss in December 2011, having overseen a total of nine fixtures.