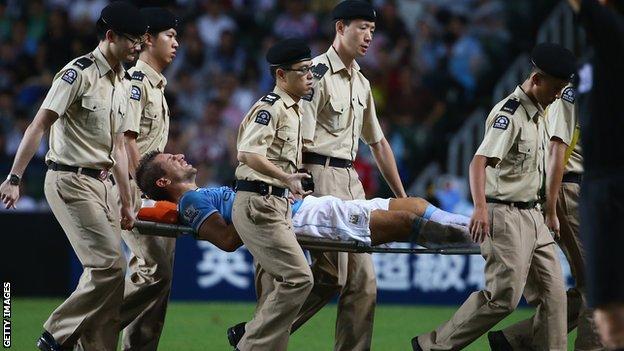 Manchester City's Matija Nastasic is to miss the first month of the season with an ankle injury picked up in July's Asia Trophy final win over Sunderland.

Nastasic, 20, was carried off in the pre-season tournament match played on a sodden pitch - criticised by some of the teams - in Hong Kong.

The Serbia defender is expected to be out for another four to six weeks.

But striker Sergio Aguero should return to training next week in a boost for the Premier League runners-up.

The Argentina international - signed for a reported £38m from Atletico Madrid in 2011 - has not featured since injuring his knee during the post-season friendly against Chelsea in May.

City's medical staff have said Aguero is "making good progress" in his recovery.

In the absence of Nastasic, who made 30 appearances in all competitions for City last season following his £12m summer move from Fiorentina, Joleon Lescott could be given the chance to partner Vincent Kompany at centre-back.