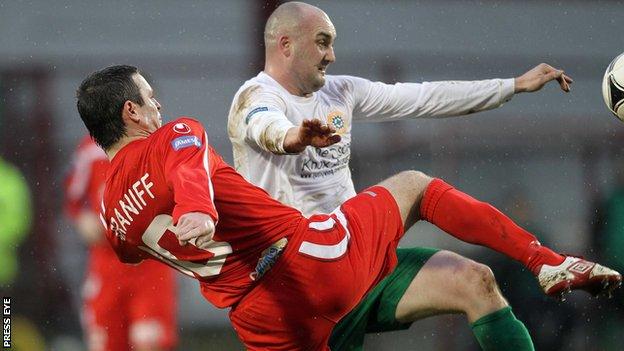 Paul McAreavey has been appointed as the new Donegal Celtic manager following Pat McAllister's weekend resignation from the job.

With the club reportedly beset by financial problems, McAllister quit the job on Sunday and no players are currently registered with the Irish FA.

There have been reports that players were told that there would be no wages or expenses this season.

Chairman Gerard Rooney is also believed to have quit his post.

McAllister informed his players of his decision following a friendly game on Saturday, and confirmed his departure on Sunday morning.

The club, who are scheduled to play Ballyclare Comrades in their Championship One opener on Saturday, have been beset by off-field problems in recent years.

McAllister, who was enjoying his second spell in charge of the west Belfast club, admitted that he would consider his future after DC lost their Premiership promotion-relegation play-off tie against Warrenpoint Town in May.

Currently, not a single Donegal Celtic player has been registered with the Northern Ireland Football League - just four days before the new league season kicks-off.

It is also thought that a number of voluntary staff at the club, including chairman Rooney, have quit.

Former Linfield stalwart McAreavey signed for the club in 2010 and may be in line for player-managing duties with the Suffolk Road outfit.