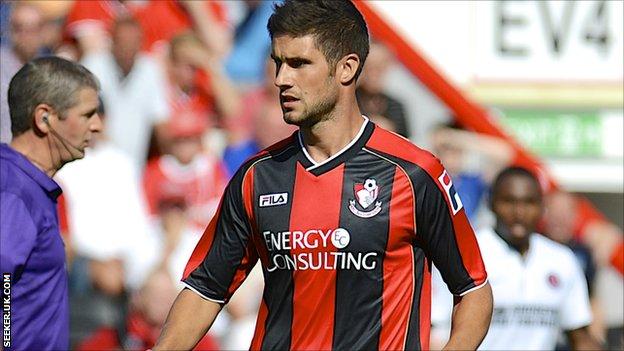 Andrew Surman has vowed to return to the Premier League and hopes to use his loan spell at Bournemouth to prove he has a future at parent club Norwich.

Surman, 26, was a key member of the Canaries' squad in their first season back in the Premier League but was restricted to just four appearances last term because of a knee injury.

"I feel I am a Premier League player," Surman told BBC Radio Solent.

Does Surman have a future at Norwich?

"Obviously he had an injury in the second part of last season. He quite fancied the move to go and get some games.

"Hopefully it works out for all parties. It's important to make sure all the players are developing and in Andrew's case that's not going to be this season but he's a terrific player and a terrific boy and he'll be missed around the training ground."

"I felt I had a decent [first] season and feel I can get back there again."

Surman, who is returning to the Cherries for a second loan spell, says he jumped at the chance to link up with boss Eddie Howe again, and felt with Norwich's summer recruitment it was always going to be hard for him to force his way into manager Chris Hughton's plans.

"I think the writing was on the wall last season," added Surman.

"Chris Hughton likes to keep a settled side, so if you are on the fringes it's very difficult to work your way in and I was injured for a lot of the season which did not help.

"I knew I'd have to go out on loan to try and play some games. You don't want to be on the bench, even if you are at a Premier League club.

"They've spent £25m in the summer so it's made it quite difficult for the players who are already there to get a game. The prospect of coming here to play games was quite attractive."

South-African born Surman made his Cherries debut on Saturday against Charlton and also started Tuesday's 1-0 victory over Portsmouth in the Capital One Cup - and he now wants build upon his good start back at Dean Court.

"I am no longer an up and coming youngster," he said. "I'm quite experienced and at 26 you want to be playing, not sat in the stand, and want to try and kick on in my career.

"I feel like I've still got 10 years left in me so hopefully I can do well for Bournemouth and keep pushing my career forward."