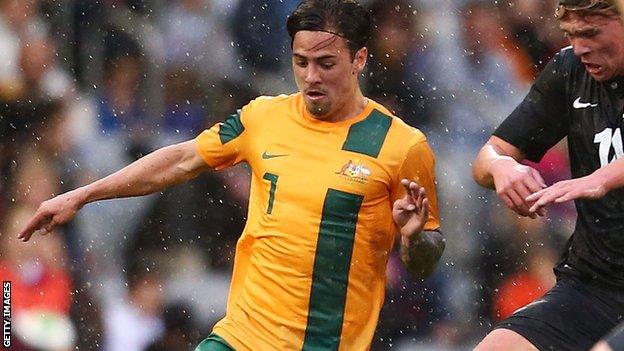 New Oxford United loan signing Ryan Williams says he is excited to be at the club and hopes to end 18 months of frustration.

The winger, 19, had not played first-team football since January 2012 before his debut for the U's in Tuesday's 4-0 League Cup defeat by Charlton.

And he hopes he can get his career back on track at the Kassam Stadium.

"It's really exciting for me to be playing first-team football," Williams told BBC Radio Oxford.

Ryan Williams is one of a trio of brothers that are all professional footballers. His twin, Aryn, was recently released by Burnley and elder brother Rhys currently plays for Middlesbrough.

Williams added: "I haven't had much luck at Fulham.

but didn't manage to play any first-team football so hopefully I will get a chance here and things will work out for me and the club.

"I didn't come here to make up the numbers. I want to fight for my spot and that is what the gaffer has asked me to do."

Australia-born Williams joined Portsmouth in August 2011, making his debut against a Middlesbrough team that included his brother Rhys,

He made six appearances for the club, his last coming in the 4-0 defeat by Chelsea in the FA Cup, before Fulham took advantage of Pompey's financial crisis However, until his Oxford debut he had not played a first-team game since then.

"I would have loved to stay at Portsmouth because I was involved in a first-team environment," he said.

"But when a Premier League club comes knocking, who knows I might not get that opportunity again.

"I now want to get in the (Oxford) team and show them what I'm about."