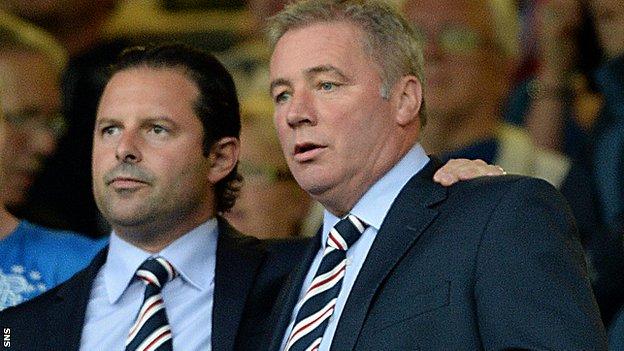 Smith resigned from his role on Monday, referring to a "highly dysfunctional environment" at board level.

"I don't think there is an awful lot more Walter could have done," said McCoist.

"It will be with the club's best interests at heart, whatever has forced him to make that decision."

Former manager Smith, 65, resigned on Monday after a period of bitter infighting at Ibrox.

Smith was said to be considering his position at the weekend after former chief executive Charles Green, who has returned to Rangers as club consultant, said Rangers had to win a cup as well as League One this season.

McCoist, who said on Saturday he was "appalled" by Green's comments, spoke about Smith's exit after his side's 1-1 draw with Newcastle in a friendly on Tuesday.

Green and McCoist sat several rows apart in the directors' box for the visit of Alan Pardew's team, before the manager moved to the dugout for the second half.

McCoist confirmed he and Green did not speak but said his relationship with current chief executive Craig Mather was fine.

"We speak regularly and we meet regularly," he said.

"It's safe to say, and see, that we are absolutely getting on fine."

McCoist added that Smith's exit does not make him feel isolated in his job as manager. Smith lifted 21 major trophies over two periods in the Rangers dugout before handing over to McCoist in 2011.

A group, thought to be led by Scottish businessman Jim McColl, is seeking to wrest control from the regime currently fronted by Mather.

With a power struggle in full swing, Smith backed calls for former director Paul Murray and Frank Blin to join the board, although he stated that Mather was doing a good job and hoped he would be able to continue.