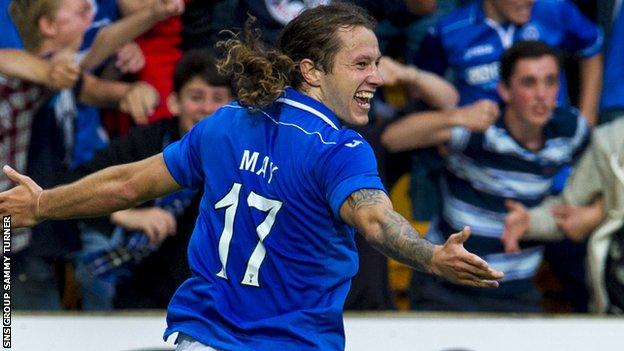 Striker Stevie May says St Johnstone are confident of finishing off the job against Minsk in their Europa League qualifier.

The Perth side hold a 1-0 lead going into the third qualifying round second leg with the Belarusians.

"I think we've got quality in the ranks and we're as hardworking as any," May told BBC Scotland.

"They're not going to be easy to beat. But the boys have got self-belief and we're confident ahead of the tie."

The 20-year-old has scored twice as Saints have gone four competitive games unbeaten this season, in Europe and in the Scottish Premiership.

His first goal of the campaign was crucial in knocking out Norwegian side Rosenborg in the Europa League second qualifying round.

And he is delighted to be playing a key role in the St Johnstone's great start.

"We've started well. On Sunday against Hearts I thought we showed some signs of having a good partnership. Hopefully that can continue, Stevie can keep banging in the goals, I can get some as well and it's a partnership that can blossom."

"A few years ago our goal was to stay in the league but now we're pushing on to be a top-six club," May said.

"For this club to be involved in European football two years in a row is incredible."

May had previously made a name for himself scoring goals during spells on loan at Hamilton and Alloa.

But the Perth-born player is even happier now that he is producing the goods for the McDiarmid Park side, and his form was rewarded with a call-up to Billy Stark's Scotland Under-21 squad for next week's friendly against England.

"I'm loving it, obviously, to get a bit of recognition," May said.

"In terms of the start to the season, I don't think it could've gone any better than it's gone. To get the Under-21 call up as well, it's great."

St Johnstone manager Tommy Wright also remains hopeful of getting through to the Europa League play-off round, which precedes entry to the group stage.

"It's still only half-time and we've got to be professional about it," he said.

"We're probably slight favourites and we've got to be guarded against that and make sure we're right on the night.

"We're very much built on teamwork and togetherness. We work very hard for each other.

"We're looking for a special night for the fans and hopefully as many as possible can turn out."