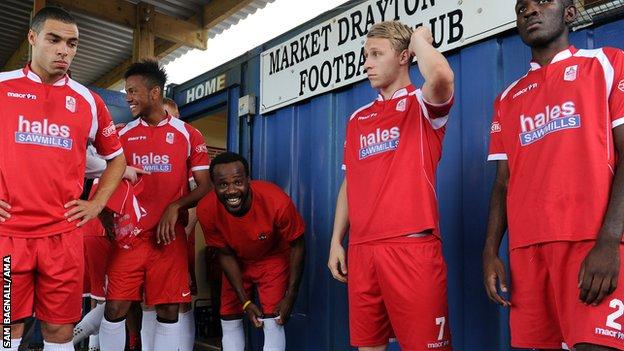 He once sat on the bench at a World Cup final, but Pascal Chimbonda is now playing for nothing at non-League Market Drayton after starting a second season without a professional contract.

While his former club Tottenham are preparing to launch the new Premier League campaign at Crystal Palace, full-back Chimbonda is set to make his Northern Premier League Division One South debut at Eastwood Town on 17 August.

It's a far cry from the 2006 World Cup final in Germany where the former France defender occupied a place on the bench as his side lost to Italy on penalties.

Pascal Chimbonda was an unused substitute in all seven France games at the 2006 World Cup in Germany.

"It's very frustrating when you don't do the job you love."

Chimbonda has turned to Market Drayton - whose average attendance last season was approximately 100 - to stay fit as he continues his bid to revive a career which has stalled since he left Doncaster Rovers in July 2012.

Despite featuring in a trial game for League One Tranmere Rovers last month, Chimbonda is currently making a 100-mile round trip from his Cheshire home to train and play for the club nicknamed "The Gingerbread Men".

He donned the team's red shirt as he played 90 minutes in a 3-2 friendly defeat against a Notts County XI on 24 July.

Chimbonda then played in a friendly against Black Country Rangers on 3 August and is scheduled to play another game at the 1,000-capacity Greenfields Sports Ground on Friday against a Stoke City XI to commemorate the opening of the new clubhouse by Potters boss Mark Hughes.

It is a world away from Berlin's 74,000-capacity Olympic Stadium, where Chimbonda watched as France lost 5-3 to Italy in that penalty shootout, or from Wembley in 2008 when he earned a winner's medal as Spurs came from a goal down.

Chimbonda was replaced by Tom Huddlestone in the 61st minute of the League Cup final with Tottenham trailing Chelsea 1-0 in front of 87,660 fans at Wembley. Spurs won 2-1 after extra time following goals by Dimitar Berbatov and Jonathan Woodgate.

Chimbonda, whose other clubs include Sunderland, Blackburn Rovers and Queens Park Rangers, has been in England since joining Wigan from French side Bastia in 2005.

He still feels he is capable of doing a job at Premier League or Championship level, despite a "frustrating" 13 months.

Last season was a write-off as plans to play in America's Major League Soccer with Chicago Fire fell through and he was forced to return to England.

"Things didn't go the way I wanted in America and I don't want to waste my time," he added.

"Age is nothing because my body is in good shape and my head is good.

"I'm waiting for someone to come and get me because I've really missed playing - I feel I'm back to full fitness."

Market Drayton finished 15th in the Northern Premier League Division One South last season. They are four promotions away from the Football League and are seeking a club sponsor.

While Chimbonda's focus is to prolong his professional playing career, he is more than happy to pass on tips to his non-League team-mates in the meantime.

"I'm very happy to help out at Market Drayton because they are giving me a chance to play again," he added.

"He clearly has the desire and the hunger to carry on because he's travelling from Cheshire to Market Drayton to train and play for us for nothing," said Ebden.

"It's great he's taken the initiative to come into non-League to keep fit. I don't think someone of his quality has played at this level before.

"He's just happy to be playing football and we're enjoying having him here because he's a good character, a nice lad and enjoys the banter.

"We've got a couple of players on contracts, but Pascal isn't getting a penny. He's doing it for himself."