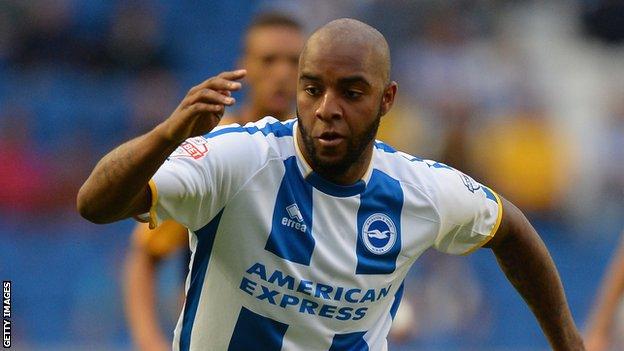 Brighton midfielder Kemy Agustien says it could take time for the side to gel.

The Seagulls have lost their opening two games of the season under new head coach Oscar Garcia.

The 26-year-old told BBC Sussex: "There is a lot of quality in this team and if we are all on the top of our toes we can be a top side.

"Everybody is starting again with a new manager. Everybody needs some time to settle in. If we have time we can prove what we are capable of."

Agustien left Swansea to join Albion on a two-year deal last week and made his debut as a substitute in the 2-1 defeat at Leeds on Saturday.

In the last couple of years I didn't really play that much. I want to start every game and be important for the team

The Dutchman, who made his full debut in Brighton's Capital One Cup defeat by Newport on Tuesday, believes he will improve with more games.

"I work hard every day and it was a good game for me to get some minutes," he commentated. "I thought I did okay but there are still some bits and pieces I am not happy about.

"Everything will come game by game. I haven't had a great pre-season so I need to make sure I am at my peak in every training session."

With more than half of his appearances during his spell at Swansea coming from the bench, Agustien hopes he can command a regular place in the starting line-up at the Amex.

"In the last couple of years I didn't really play that much," he said.

"I have been involved in games but I want to start every game and be important for the team.

"I don't really have a favoured position. I just want to play every game.

"The manager speaks a lot with me and knows my qualities. I like to get forward as my strength is to play box to box and play in the opponent's half.

"That's why I need to train hard and focus on my fitness."