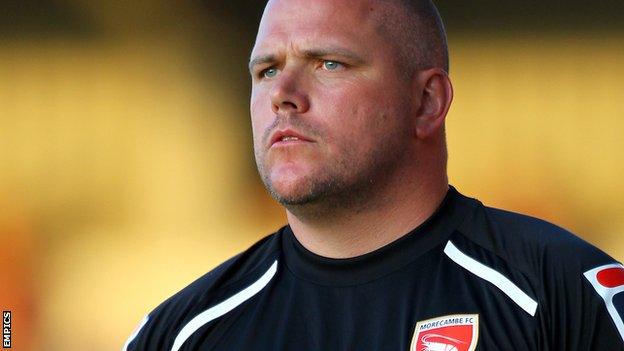 Manager Jim Bentley is concerned he may be asking too much of his inexperienced players as Morecambe's injury list continues to grow.

Teenager Chris Doyle may be involved in their game at Southend on Saturday.

"You've got to be careful with young lads that you're not flogging them straightaway. You've got to ease them in," Bentley told BBC Radio Lancashire.

"Similar to what we did last season with Ryan Williams, Jack Redshaw and Jordan Burrow, and then this season with Alex Kenyon and Jack Sampson - you can't expect too much too soon.

"We're a bit depleted at the moment, certainly in the back line. I'd like to bring someone in but it's not possible at the moment."

after undergoing a hip operation in pre-season, and the loss of McCready has stretched Bentley's thin squad even further.

"You can try and prevent muscular injuries, but impact injuries like Chris and Jack as well, you can't really affect," added the Shrimps boss. "Unfortunately we've got another long-term injury on our hands."

Despite those injuries, Morecambe have won their last two matches in League Two and almost shocked Premier League side Newcastle in the second round of the Capital One Cup.