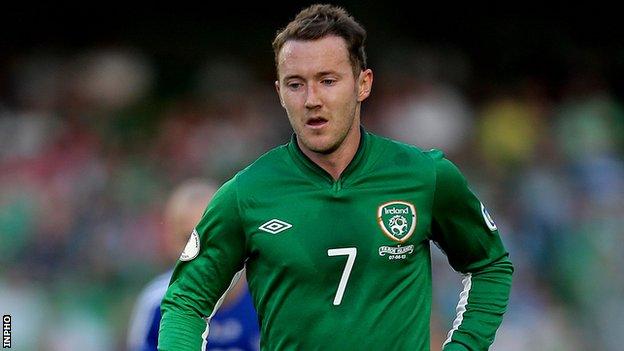 Aiden McGeady has become the latest withdrawal from the Republic of Ireland squad for next week's friendly against Wales in Cardiff.

The Spartak Moscow player is ruled out after suffering a knee injury in a training session with his club.

Uncapped Norwich City player Pilkington has pulled out of a number of previous Republic squads.

Pilkington will miss out on next week's opportunity to make his Republic of Ireland debut because of a knee injury.

Cox is out of the game with an ankle problem, while Stephen Henderson replaces absent goalkeeper David Forde.

Forde is ruled out after undergoing surgery on a knee injury sustained while playing for Millwall on Saturday.

Yeovil's Paddy Madden has been put on stand by for a call-up to Giovanni Trapattoni's squad.

LA Galaxy striker Robbie Keane is not being asked to travel across the Atlantic for the Cardiff game.

Centre-back Richard Dunne is also an absentee as he attempts to regain full fitness with his new club Queens Park Rangers.

Wolves striker Kevin Doyle is again left out after falling out of favour with Trapattoni over the last six months.

Aston Villa defender Ciaran Clark returns after being unavailable for those matches because of injury.

The friendly in Cardiff on 15 August will form part of the preparations for the vital World Cup qualifiers against Sweden and Austria in September.