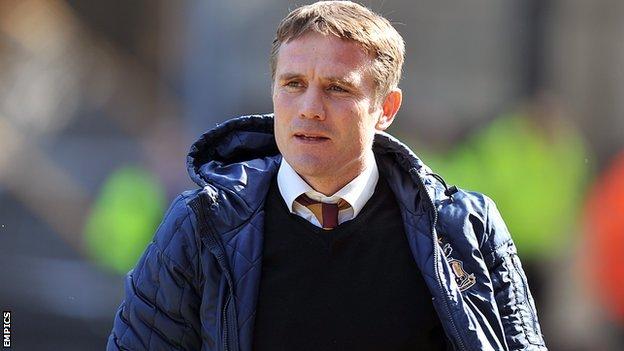 Bradford City boss Phil Parkinson has praised his side's "spirited" performance in their Capital One Cup defeat by Huddersfield Town.

The Bantams, beaten in last season's final, lost 2-1 to their local rivals.

He told BBC Radio Leeds: "I thought the first-half performance was terrific and it was a real shame to concede just before the break.

The Bantams did not lose a game in a cup competition until 18 December last season. Parkinson's side were beaten 4-1 in an FA Cup second round replay by Brentford.

"You always want to win but if you lose you want to go down fighting and we did. It was a spirited display."

He added: "I expected us to come and make a good game of it and we did."

Parkinson made seven changes to the side that drew with Bristol City in League One on Saturday but denied that the changes had weakened his team.

"I knew this would be a tough game against a really good side but I've got faith in every member of my squad," he said.

"I've said before that when I make changes it isn't weakening the side, it's putting players in who are fresh and some of the lads that came in did great."