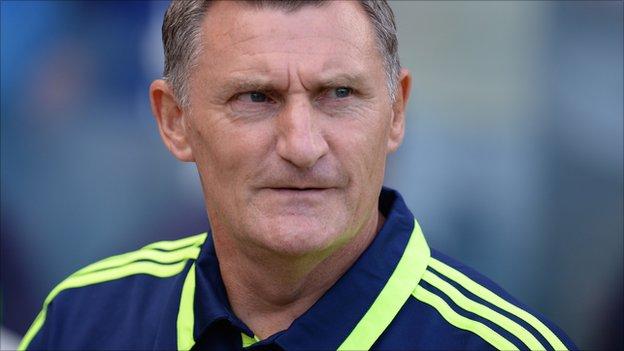 Middlesbrough manager Tony Mowbray has said highlights a need to add to his striker options.

The Teessiders had 23 shots on goal but only one, by Lukas Jutkiewicz, ended up in the net.

Boro are close to signing Bristol City winger Albert Adomah, but Mowbray would not discuss rumours linking them with Leeds striker Ross McCormack.

"Maybe it's an eye-opener for us," Mowbray told BBC Tees.

"We have to strengthen. We need to have better options so if we're not scoring goals, someone else comes in.

"We're trying to add to that department and create better competition."

Defeat leaves Boro without a win in their opening two games in league and cup, while both losses have come after taking the lead.

Mowbray was also disappointed with his side's defensive efforts, particularly as the first goal came from a long-throw while the crucial second was from a set-piece.

"You show them videos [to help them see their problems], could they have done this or that? You work on repetition of good habits in training," Mowbray said.

"But the bottom line is that things as basic as defending set-plays, it's about desire to head the ball.

"We put five, 10 times more great balls into their box than they put in ours, but the corner which they scored from they got first contact.

"It's frustrating, so it's about the desire to get their head on the ball in both boxes, and if we haven't got the players on the books that want to or can do that, then we have to search hard for people who can."