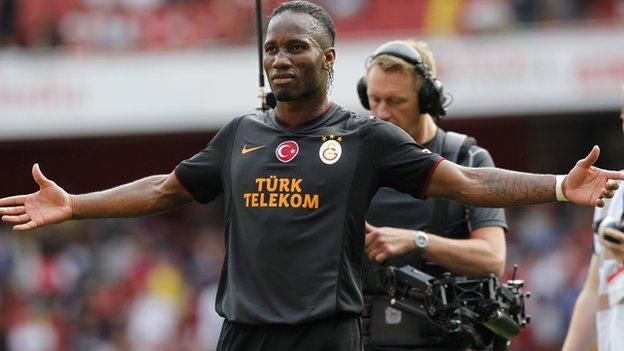 Didier Drogba has been recalled by Ivory Coast for the first time since the country's disastrous Africa Cup of Nations at the start of the year.

The 35-year-old striker is in a 23-man squad for a friendly against Mexico in New York on 14 August.

Drogba was dropped for the first time during the Nations Cup and coach Sabri Lamouchi then left him out of World Cup qualifiers in March and June.

Lamouchi insisted at the time that Drogba needed to work on his fitness.

Drogba struggled during the Nations Cup in South Africa where the Ivorians were huge favourites to win the title but were beaten in the quarter-finals by eventual winners Nigeria.

So long a talismanic figure for the Elephants, Drogba found himself out in the cold after the tournament and Lamouchi was forced to deflect speculation of a rift with his captain, insisting the former Chelsea star would return when he was back in top condition.

Drogba, who is hoping to make a third successive World Cup finals appearance in Brazil next year, looked sharp at the weekend in helping Galatasaray win a pre-season mini-tournament at Arsenal.

And Lamouchi has proved true to his word by bringing Drogba back into the fold.