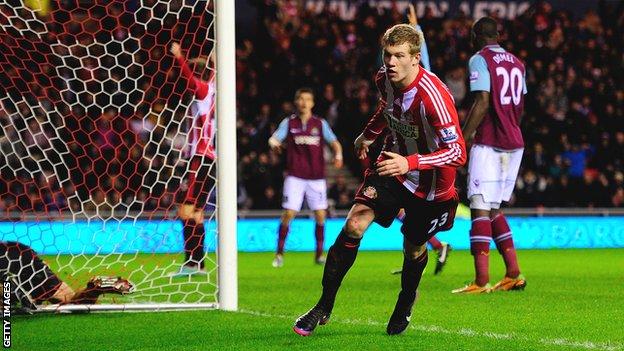 Wigan Athletic have signed Sunderland and Republic of Ireland winger James McClean for an undisclosed fee, reported to be in excess of £1m.

The 24-year-old could make his debut in Sunday's

and scored 11 goals in 70 games for the Black Cats.

The player revealed on his Twitter account on Wednesday that he had completed his move to the DW Stadium.

After the transfer was confirmed, McClean told Wigan's website: "This is a fantastic club.

"After speaking with the manager [Owen Coyle] I can't wait to meet the rest of the team, start training and hopefully make my debut very soon with the aim of helping us get back to the Premier League."

He is the 10th signing made by Wigan since Coyle replaced Roberto Martinez as Latics boss.

which is expected to earn the League of Ireland side more than £150,000.

McClean, who was part of the Republic's squad at Euro 2012 and has been capped 13 times, enjoyed an impressive first season in the Premier League under the management of Martin O'Neill, with his form earning him a

Although he featured in 36 of Sunderland's 38 league fixtures during the 2012-13 campaign, he struggled to build upon his early promise as the Black Cats battled against relegation.

He fell out of favour with Sunderland manager Paolo Di Canio during pre-season, with England international Adam Johnson starting regularly on the left wing in their friendly matches.

And the arrival of from Juventus for £6.5m in July would have further limited McClean's first-team opportunities at the Stadium of Light.

FA Cup winners Wigan began the Championship season with a on Saturday and are strongly tipped for an immediate return to the top flight.