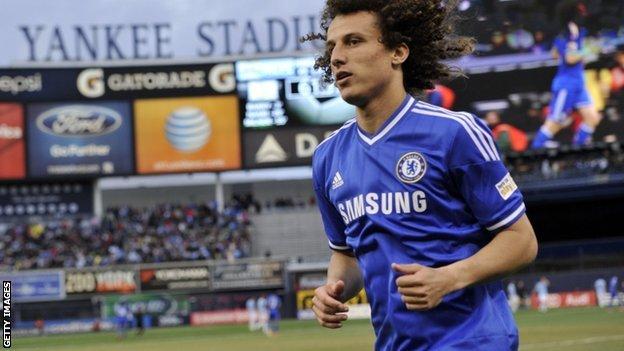 Chelsea have received a bid from Barcelona for their Brazil international defender David Luiz.

The 26-year-old, who joined Chelsea from Benfica for around £21m in January 2011, has been a long-term target for the Catalan giants.

Chelsea have insisted throughout that Luiz, who has played more than 100 games for the club, is not for sale.

The bid is thought to be cash only and does not involve any Barcelona players in part exchange.

Barcelona - now managed by Argentine coach Gerardo Martino - have made signing a centre-back a priority.

Veteran Carles Puyol suffered knee problems last season and the 35-year-old had surgery in March, while fellow defenders Gerard Pique, Adriano Correia and Javier Mascherano were either injured or suspended at certain points in the campaign.

Paris St-Germain centre-back Thiago Silva had been linked with a move to the Nou Camp but the Brazilian signed a new contract with the French champions last month.

Luiz played 30 minutes of Chelsea's friendly against Inter Milan last Thursday but he has been withdrawn from Jose Mourinho's squad for the Chelsea manager's match against former club Real Madrid in Miami.

Bayern Munch had also been linked with a move for Luiz, who signed a new five-year contract at Stamford Bridge last year, although the European and German champions told BBC Sport in July they have enough central defenders at the club.