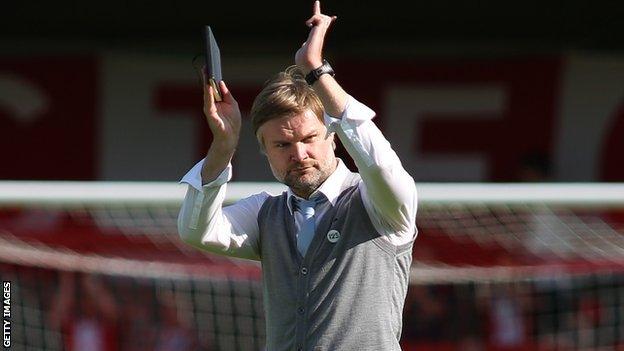 Coventry manager Steven Pressley says he is proud of the way his players have approached their opening fixtures.

With the club under a transfer embargo because of the off-field uncertainty, Pressley was only given dispensation to sign players after the first two games.

Despite losing to Crawley and Leyton Orient, he praised their efforts.

"I don't think at this moment the players could give any more than they are giving, I'm exceptionally proud," he told BBC Coventry & Warwickshire.

If we keep making the progress we're making as a team, I think we can be a very good side this season

The Sky Blues now have an agreement in place with the Football League where they can bring a player in depending on cost and on players moving out, meaning they were able to sign Mathieu Manset as a replacement for Cody MacDonald.

Pressley's side had begun the season with a 10-point deduction after one of the club's subsidiary companies was left facing liquidation following the rejection of a Company Voluntary Agreement on Friday.

The Football League allowed them to start the campaign, but they have been defeated by late goals in both of their first two matches.

Pressley has had to name young line-ups for both fixtures, but believes that his side are developing quickly as they face a difficult campaign.

"I don't think they'll need picking up in terms of their performance," Pressley commented.

"The reception we got from our supporters at the end summed up our performance.

"We're disappointed because you want to win games of football, but it's going to be step-by-step this season.

"If we keep making the progress we're making as a team, I think we can be a very good side this season."