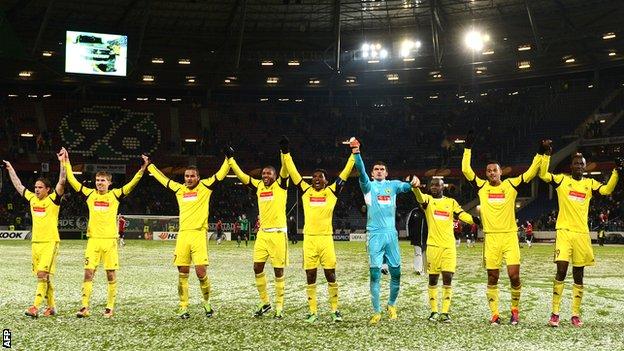 When news broke that Anzhi Makhachkala, the billionaire-backed Russian Premier League club, were cutting their budget and selling their top players, many journalists - myself included - thought it was a late April fool.

But this was no joke. In the hours that followed a series of announcements, each more puzzling than the other, confirmed "The Anzhi Project", at least as we previously knew it, was coming to an end. Suleyman Kerimov, Anzhi's billionaire backer since January 2011, was no longer happy to finance a gravy train.

The club's budget, officially quoted at an extravagant £116m per season (second only to Zenit St Petersburg in Russia), was to be reduced to between £32m and £45m.

Rene Meulensteen, formerly Sir Alex Ferguson's assistant at Manchester United and the man hand-picked by predecessor Guus Hiddink to manage the club, lost his job after just 16 days. And a host of players, foreign and Russian, bought for extravagant fees over the past two and a half years, were to be shipped out post-haste.

The football media naturally looks for footballing reasons for Kerimov's sudden about-face - and there are several.

After finishing in third place last season, hopes were high of a title push, but Anzhi have begun the campaign in disappointing fashion, losing two and drawing two of their opening four games.

An official statement said as much, stating that "having analysed the club's recent sporting results, the decision has been taken to work on a new long-term strategy for the club".

Rumours have been rife of training-ground bust-ups ever since Meulensteen was handed the manager's job just over a fortnight ago. There were reports that a rift between newly signed Russia captain Igor Denisov and £130,000-per-week striker Samuel Eto'o, with Meulensteen caught in the middle, had destroyed the Dutchman's authority.

There are apparent precedents here, with Eto'o's alleged unwillingness to work with previous Anzhi coaches Gadzhi Gadzhiev and Yury Krasnozhan seeing them leave. Ironically - and this could spell the end for Eto'o too - Gadzhiev is widely tipped to replace Meulensteen.

But events on the field only provide a partial explanation for Anzhi's sudden dismantling of more than two years of hard work and investment. Speculation about the personal affairs of owner Kerimov has dominated the headlines in Russia in recent days.

Though rumours the 47-year-old is suffering from ill-health have been denied, what is not in question is that another of the oligarch's main business interests, potash producer Uralkali, has had a rocky few days.

Only last week it was announced the company had severed a trade agreement with a Belarusian company, ending a cartel which had effectively fixed prices and guaranteed a steady flow of income to Uralkali and Kerimov, whose fortune was said to be in excess of £4bn in March.

In the hours after the announcement £5.5bn was wiped off the company's value, with Kerimov losing some £325m in net worth, although the share price has since recovered. Kerimov's representatives are drawing no connections between Uralkali's woes and Anzhi, but the coincidence of events seems instructive.

How things play out for the remainder of the season and beyond remains an open question. But while many are already writing Anzhi's obituaries, club president Konstantin Remchukov insists Kerimov "is still in control of the club" and will remain its chief financial backer.

And several commentators and fans have greeted the change of policy with relief.

"Having spent £290m, all Kerimov has done is enriched a bunch of speculators," Alisher Aminov, a former board member of the Russian Football Union, said.

Fans have reacted in a similar fashion, with the webpage of Wild Division, the club's supporters organisation, peppered with positive comments.

"Many of us have waited for this for a long time," a user named Gubden wrote. "What difference does it make which players are on our side? The most important thing is that they wear our colours and we support them," another, Maga Pitersky, added.

What is certainly true is that Anzhi will now have to turn towards homegrown talent.

They may finally return to Dagestan; the players currently live and train in Moscow, flying the 800 miles to Makhachkala only for home games.

And even with a budget of £32-£45m, they can certainly compete for the Russian league's European places.

But the days of excess, of Eto'o's enormous contract, of the Bugatti Veyron given to former player Roberto Carlos as a present, and of Anzhi's £24m game of tug-of-war with QPR over Christopher Samba, are now most certainly consigned to the past.