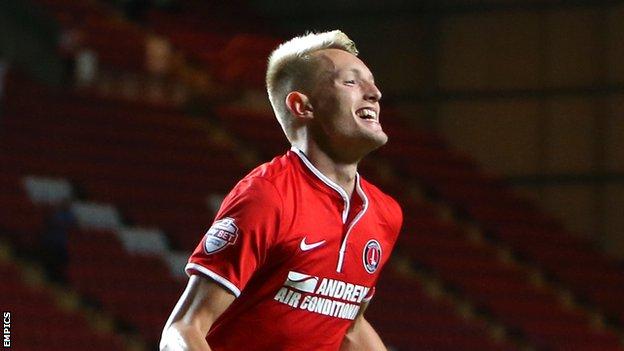 Charlton Athletic striker Joe Pigott says scoring on his debut for the club was a great moment.

The 19-year-old academy graduate scored a stoppage-time penalty in the 4-0 Capital One Cup victory over Oxford at the Valley on Tuesday.

He told BBC London 94.9: "I loved it. I was very happy although I was maybe a bit lucky to slip it under the keeper.

"It was my first game and I really wanted the penalty. Luckily the other lads backed down."

He added: "Hopefully there will be more in the future."

It's a good step up and I am enjoying getting stuck in. I am working hard to improve and it is a great environment for me

Pigott, who impressed for the south east London club's development squad last season, admitted he was surprised to play the full match.

"I knew I would start but I didn't expect to play the full 90 minutes," he said.

"I thought someone like Yann [Kermorgant] would come on with 10 or 15 minutes to go.

"It's a positive but we'll see how things go. I tried as hard as I could and got the goal in the end, which is what I do.

"That team has got us through the round so hopefully the gaffer [Chris Powell] will put out the same team in the next round and I can get another game."

The Kent-based striker says he is relishing being involved with the first-team squad.

"It's a good step up and I am enjoying getting stuck in," he said.

"I am working hard to improve and it is a great environment for me.

"I always know I will get chances and I have great confidence in myself that I am going to take them."