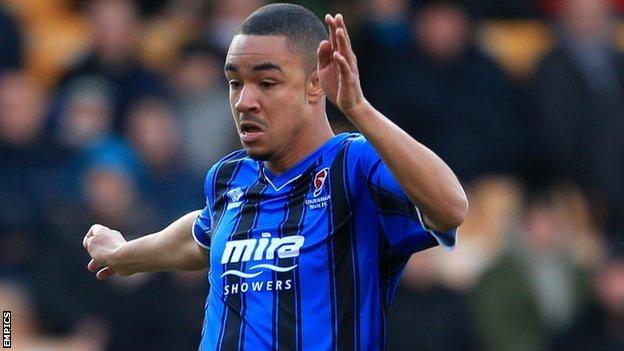 The 26-year-old, who joined the Robins in January from AFC Wimbledon, scored twice and earned a penalty in their 4-3 extra-time victory on Tuesday.

His impressive performance came after he scored in Cheltenham's opening League Two game against Burton.

"That's the player I signed and who I knew I was signing," said Yates.

"I thought he was shocking against Kidderminster last week [in a friendly], and I told him so.

"Neil [Howarth, assistant] has done a lot of one-to-one and he should take the credit. He's got into his head."

Former Stevenage player Harrison made 19 appearances for Cheltenham last season - 10 as a substitute - but could only manage one goal.

His marked improvement this term has been recognised by Yates, and the Robins boss wants it to continue.

"Byron has got to do that week in and week out now.

"When he's in a bit of a rut, he can't express himself like he did in the whole game today [Tuesday].

"I want to see him play with a smile on their face as I haven't seen Byron do that."