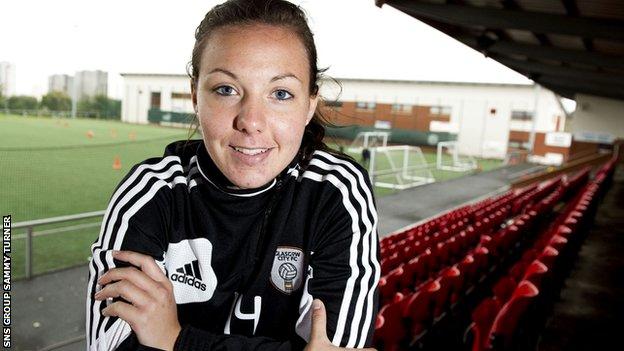 Scotland international Rachel Corsie believes she is playing with the best ever Glasgow City side as their Champions League campaign begins.

City are in Holland to face Croation champions WFC Osijek, FC Birkirkara of Malta and Dutch and Belgian champions FC Twente in the group stage.

"It's possibly the best squad we've ever had," Corsie told BBC Scotland.

"We've got a lot depth and added some internationals. We're looking strong and there's competition for positions."

In last season's compeition, Glasgow progressed from the group stage to enter the round of 32 teams, but were knocked out 2-1 on aggregate by Danish side Fortuna Hjørring.

It's going to be tough to get out the group stages this time, but we have to believe we can do it.

Defender Corsie, 23, would love to get to the latter stages again.

"We've reached the last 16 before and that's where we want to be - even further if possible," she said.

"But it's a tough draw. It's going to be tough to get out the group stages this time, but we have to believe we can do it.

"We're amateur and we don't often get opportunities to be on the big stage. We go out there as top seeds and really believing that we want to be in the last 32 draw for the next stage."

Only the group winners guaranteed progression to the knock out stages.

First up for City, coached by Eddie Wolecki Black, is WFC Osijek on Thursday, then FC Birkirkara on Saturday and FC Twente on Tuesday.