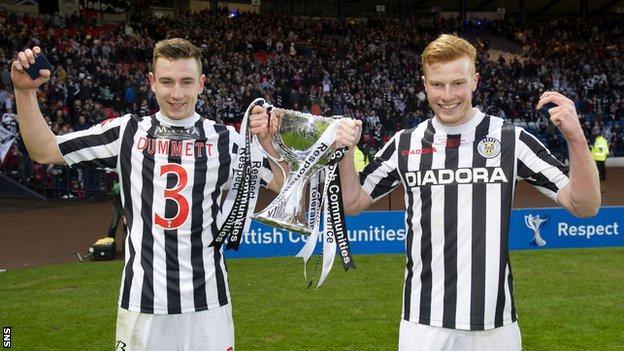 League Cup holders St Mirren face a tricky visit to Queen of the South in the second round of this season's tournament.

Aberdeen are at home to Alloa, Kilmarnock host Hamilton and Dundee United travel to Dumbarton.

Forfar's reward for beating Rangers is an away tie at Dundee, with the teams also due to meet in the Ramsdens Cup.

Scotland's European representatives; Celtic, St Johnstone, Motherwell and Hibs enter in the next round, along with Inverness Caley Thistle, who finished fourth in the top flight last term.

St Mirren lifted the cup for the first time in March when they beat Hearts 3-2 in the final.

"We had a difficult run on our way to winning the trophy last season," explained manager Danny Lennon.

"But it's no different going into this year's competition as the holders than to any other season. We want to do well in all three competitions that we enter.

"A lot of people say that lightening won't strike twice, but it can. The trophy is something we want to hold on to."