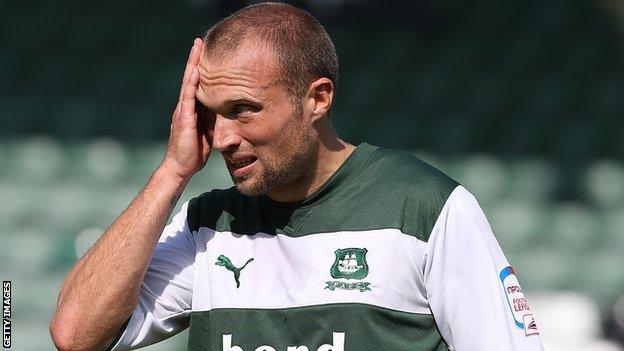 Ex-Plymouth striker Warren Feeney says he is enjoying the challenge of non-league football after his appointment as player-assistant at Salisbury City.

The 32-year-old had the chance to stay on as an Argyle player but left Home Park to take up the position with the Conference Premier newcomers.

Feeney is four years older than Salisbury manager Mikey Harris, who, at 28, is the youngest full-time manager in English football.

"It's a new challenge and a new lease of life for me," he told BBC Wiltshire.

"The gaffer asked if I'd be his number two and continue playing. I had my bags packed and I didn't hesitate."

The Northern Ireland international continued: "I did a full pre-season with Plymouth and did well in a couple of pre-season games.

"But, with League football, I've been there and done it. When this opportunity came up it was too good to turn down.

"I wanted to progress into coaching but I also still wanted to play. I dread the day that I can't play and mixing both roles is challenging but it's something I enjoy and I'll give it 100%."

He has made 379 appearances and scored 84 goals in all competitions - 34 of those games coming last season for Plymouth.

"Mikey is the boss but I like to be vocal," Feeney said. "I like positivity around the place but when things aren't going right you've got to be a voice.

I'm still in contact with Roberto Martinez [ex-Swansea, now Everton boss]. He actually text me and said 'welcome to the world of stress'.

"I can't take sloppiness. I've never been brought up like that. I'm not one who will just sit there and pick up my money, I want to earn it.

"I like togetherness and from what I've seen from the changing room so far is that they are hungry and I'm sure we will gel together quickly."

Feeney has played in all three tiers of the Football League and says he will call upon former bosses for advice as he embarks on a managerial role.

"I've been lucky to play with some great players and I've kept in contact with managers," he continued.

"When I first came down here I phoned John Sheridan [Plymouth boss]. I was only with him for five months but I learnt a hell of a lot off him.

"I'm still in contact with Nigel Worthington [ex-Northern Ireland manager] and Roberto Martinez [ex-Swansea boss]. He actually text me and said 'welcome to the world of stress'.

"The good thing is I can rely on these people and it's something I will need to do."