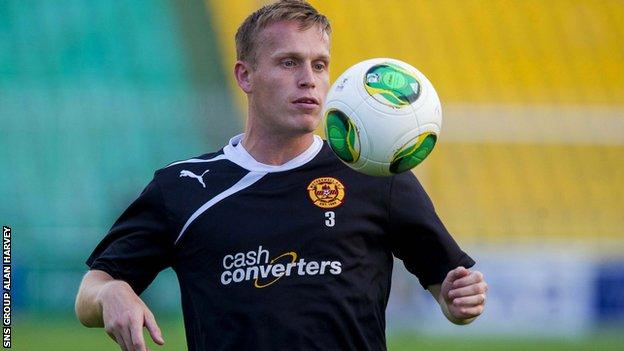 Motherwell's Stevie Hammell believes organisation is the key to overcoming a 2-0 deficit against Kuban Krasnodar in the Europa League.

The 31-year-old defender refuses to give up hope of turning things round in the second leg of the third qualifying round tie.

"If we come here organised with a good game-plan, and hopefully get an early goal - you never know what can happen."

Two second-half goals from Kuban's Ivelin Popov made it a first-leg to forget for Stuart McCall's side.

We're not going into the game with any negative thoughts at all.

And he has travelled to Russia without influential players James McFadden, John Sutton and Iain Vigurs in his squad - preferring instead to keep them fresh for the Scottish Premiership visit of Aberdeen on Sunday.

Hammell, who will play his 19th game in Europe for Motherwell, still fancies the Fir Park side's chances of an upset against former Romania international Dorinel Munteanu's men.

"We're not going into the game with any negative thoughts at all," Hammell said. "I think we can go over and cause some problems.

"Getting the game against Hibs and a good positive result is only going to help things, I think we'll be better prepared.

"That'll give us the platform now to push on and give a little bit extra."

Motherwell will be pleased to hear Popov and his striker team-mate Gheorghe Bucur are injured for Thursday's match at the Kuban Stadium.