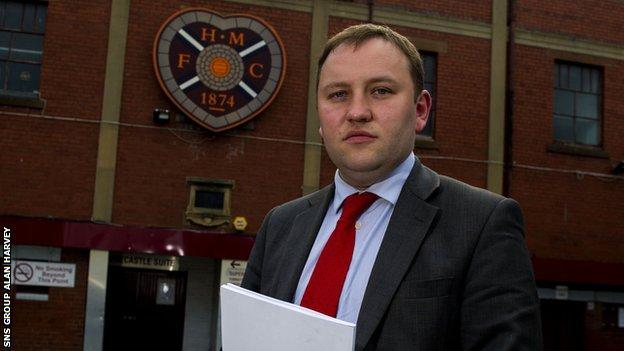 Fans' group the Foundation of Hearts are now in pole position to be handed preferred bidder status for the club, BBC Scotland has learned.

The only other group who are in the running are Five Stars Football Ltd who are led by the former chairman of Livingston, Angelo Massone.

However they have still to supply proof of funding to administrator BDO.

A deadline has been set for them to provide this, along with details of who is backing their bid financially.

The Foundation of Hearts' chairman is Ian Murray MP.

BDO are looking to offer preferred bidder status possibly before the end of August, but any deal must be agreed with the major creditors of the club.

BBC Scotland has also learned that objections have been lodged in a Lithuanian court over the proposed liquidation of Hearts' parent company UBIG.

The Lithuanian investment company own 50% of Hearts shares and until the court makes a decision on the future of the company, no sale of Hearts can be completed.

Sources in Lithuania expect a decision from the courts on UBIG to be made before the end of September.

The Edinburgh side started the season with a 15-point deduction due to their insolvency problems and opened their campaign with a 1-0 defeat by St Johnstone on Sunday.