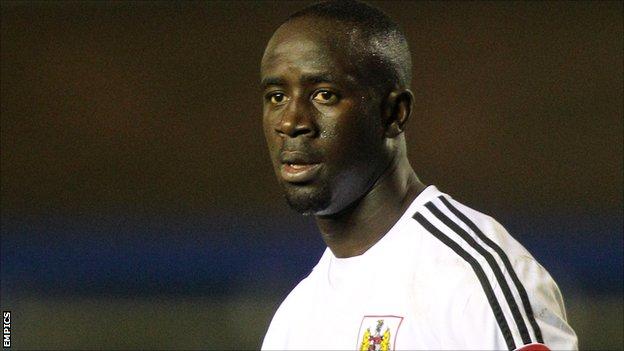 Bristol City winger Albert Adomah has joined Middlesbrough for an undisclosed fee, thought to be £1m.

The 25-year-old, who was in the last year of his contract at Ashton Gate, has signed a three-year deal with the Championship outfit.

It brings to end the Ghana international's three-year association with City, having joined in 2010 from Barnet for a tribunal-set £150,000.

Managing director Jon Lansdown said: "Albert has been a joy to watch and a pleasure to work with over the past three years.

"His level of professionalism and courtesy is a credit to himself. I personally wish him all the best for the future and hope to see him go on to play in the Premier League."

Adomah, capped nine times at international level, had attracted interest from Wigan over the summer and handed in a transfer request last month.

He took part in City's pre-season campaign but was left out of the squad for their League One opener with Bradford and Tuesday's Capital One Cup win over Gillingham.

Head coach Sean O'Driscoll said: "We are sorry to see Albert go, but his departure is not a surprise and we have been planning for it all summer.

"If he had stayed it would have been fantastic but we totally understood his situation and had to act in the best interests of the club.

"I cannot fault Albert's attitude over the past couple of weeks. It would have been easy for him to be distracted by the uncertainty of his own future but he never let that affect him in training or the two friendly games he played. We wish him all the best."

Non-league Barnet are owed 20% of the profit Bristol City have made on Adomah.