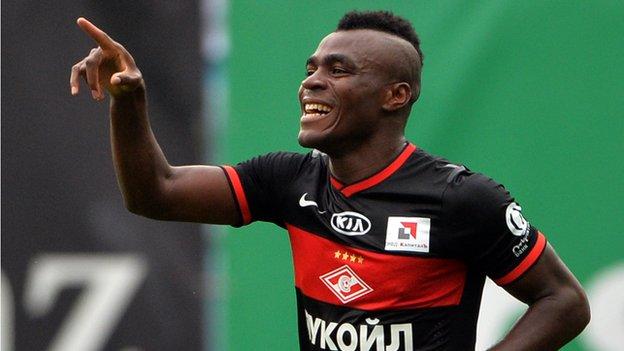 Nigeria striker Emmanuel Emenike has completed a move to Fenerbahce from Spartak Moscow for US$17.4m.

The 26-year-old Nigeria international re-joins the Turkish club after two seasons with the Russian league leaders.

"When the possibility of coming back was first mentioned, I said to myself 'I hope both clubs will agree to that'," Emenike told BBC Sport.

"Once a deal was agreed, I couldn't wait to see the fans and city again. Right now, I am just delighted to be back. It's like coming back home."

Emenike first joined Fenerbahce in May 2011, signing from Karabukspor at the end of the season, but he left in July the same year without without playing a a match for them.

He was questioned by Turkish police and arraigned for match-fixing allegations but acquitted in April this year, because of a "lack of credible evidence."

The Super Eagle insists he has put the episode behind him and is ready to shine for the club.

"I don't want to talk about the dark past because there is a bright future ahead," added Emenike, who will be unveiled by Fenerbahce on Saturday.

"I just want to thank Fenerbahce officials, fans and everyone for making this [his return] happen and for giving me a warm reception at the airport.

"I want to fulfil a huge dream of playing in front of our passionate fans.

"I have unfinished business here because I owe it to the club and fans who never stopped supporting or believing in me."

Emenike's agent Erdem Konyar has thanked both clubs for making the player's return a smooth one.

"He's grateful that things went smoothly with Spartak and he also stayed professional all through negotiations." he said.

"We thank Spartak and hope his return to Fenerbahce will help make him a bigger and better player than he is at the moment."

Before the switch, the striker scored three goals in his last three league appearances for Spartak.

Emenike was joint-top scorer when Nigeria won the African Cup of Nations in South Africa in February.