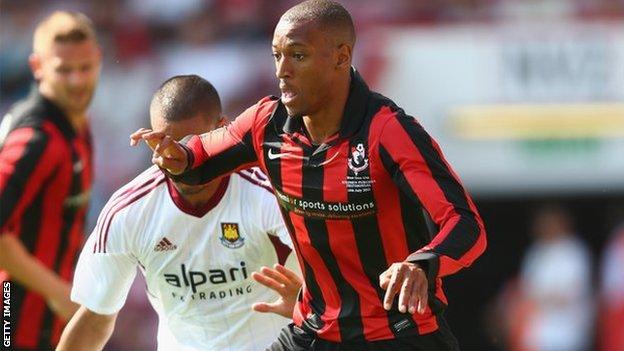 Bournemouth manager Eddie Howe has insisted Wes Thomas is not for sale after turning down a bid for the striker from Swindon Town.

An offer, reported to be around £125,000, was submitted by Town on Wednesday but it fell short of the Cherries' valuation of the 26-year-old.

"They (Swindon) haven't been encouraged and the bid has been rejected."

Former Cheltenham and Crawley forward Thomas has been with Bournemouth since 2011 and has scored 11 goals in 48 games.

Having fallen out of favour at the Goldsands Stadium, Thomas spent much of their promotion campaign out on loan at League One Portsmouth, as well as Championship pair Blackpool and Birmingham.

Howe expected Thomas to leave the newly-promoted Championship club in January, but he remains on their books.

And with only three recognised strikers in his squad and Brett Pitman out injured, Howe says is not looking to sell.

Swindon are looking to bring in a new striker following the departure of James Collins to Hibernian and Adam Rooney to Oldham.