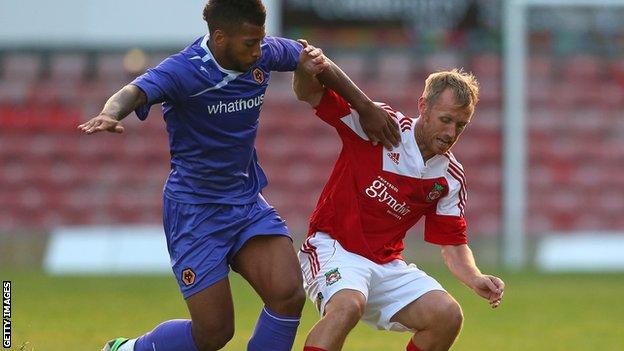 Striker Brett Ormerod is doubtful for Wrexham's opening game of the season against Welling United on Saturday.

Ormerod, 36, suffered a hand injury in a collision with team-mate Theo Bailey-Jones during a match in training.

"Brett Ormerod fractured a finger the other day so it's 50/50," assistant manager Billy Barr said.

Wrexham will also be without Jay Colbeck for up to six weeks after the striker had knee surgery.

"He's just had a flush of his knee," Barr said of Colbeck's operation.

"He struggled at the end of last season and during pre-season and has struggled with swelling after training," Barr added.

"We've got to the bottom of it and they've taken I think six fragments out of his knee with the flush.

"Hopefully that will be him back on the path to recovery."

Captain Dean Keates will miss the opening three weeks of the season after having a toe operation while defender Mark Creighton has been struggling with a calf injury.