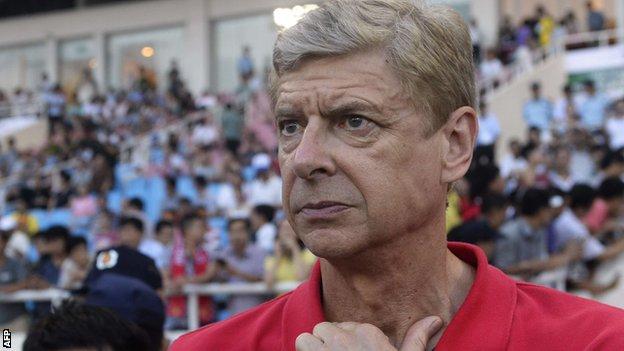 Arsenal have been drawn against Fenerbahce in the play-off round of the Champions League for a place in the elite 32-team group stages.

Fenerbahce were given a two-year ban from European competition in June over match-fixing allegations but were later reinstated while an appeal is heard.

The Gunners will face the Turkish runners-up away on 21 August, with the home leg six days later.

Tottenham have been drawn away to Georgian outfit Dinamo Tbilisi in the first leg of the Europa League play-off tie for a place in the main draw.

Spurs, who lost on penalties to Basel in the quarter-finals of last year's competition, met Tbilisi in the 1973-74 Uefa Cup, drawing 1-1 away and winning 5-1 at White Hart Lane.

League Cup winners Swansea, returning to European competition for the first time since 1991, secured a place in the play-off with a 4-0 aggregate win over Malmo and were drawn at home against Romanians Petrolul Ploiesti.

The ties will be played on 22 and 29 August with the main draw for the group stages, featuring FA Cup winners Wigan, on 30 August.

Fenerbahce appealed to the Court of Arbitration for Sport after they and compatriots Besiktas were punished by European governing body Uefa.

Cas says a final decision will be made by 28 August, which could be the date of the second leg of the play-off, but Uefa says no decision has yet been made regarding what would happen if Fenerbahce won the tie and lost their appeal.

The teams met in Group G of the competition in 2008-9 with Arsenal winning 5-2 in Turkey and the return at the Emirates finishing goalless.

Ukrainian side Metalist Kharkiv, who have been drawn against Schalke in the Champions League, face a Uefa disciplinary hearing next week after losing an appeal over a match-fixing case from 2008.