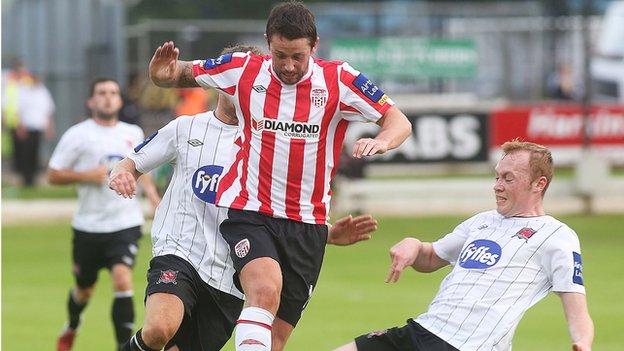 Patterson rolled the ball past Mark McGinley after accepting a ball from Michael Duffy in the 33rd minute.

The striker then fired home a low near post volley two minutes later after Paddy Kavanagh beat three defenders and pulled the ball back.

Samir Belhout curled the ball into the far corner on 53 minutes but Duffy fired home from six yards out after 60.

The result sees the Candystripes move up to third position in the Premier Division, five points behind leaders St Patrick's Athletic.

Prior to the game, Declan Devine's side had lost three of their last four league games and crashed out of the EA Sports Cup.

Patterson netted the opener with his weaker foot and the ex-Linfield and Coleraine player nipped in ahead of a defender to add the second after good work by Kavanagh on the right.

Belhout's strike eight minutes after the interval reduced the deficit but Duffy's low finish made the points secure.

Ruaidhri Higgins played through a sublime ball to Simon Madden on the right and he passed into the area for Duffy to score.