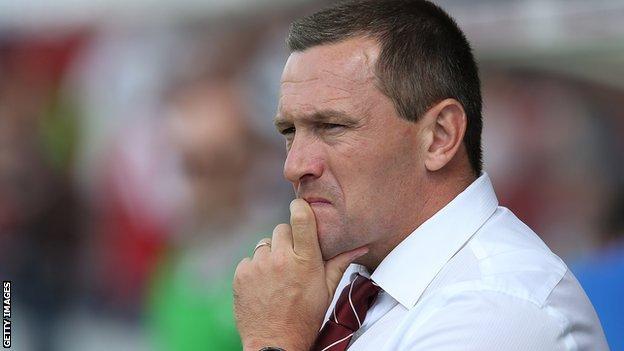 Northampton Town boss Aidy Boothroyd has said his side will "come good in the end" after a summer of upheaval.

"A lot of people say we've got to get off to a good start - we got one league win in August last year and we got to the play-off final."

A host of players left Sixfields following last season's Wembley disappointment, with Boothroyd rebuilding a side he believes is capable of challenging for promotion within the constraints of

"It takes time to build a team. I could have kept a lot of the players that we had last year and I'm sure we would have started better," said Boothroyd.

"But if we're going to play the way I want us to play and finish where I want us to finish, the team had to be dismantled and started again.

"It is going to be a bit stop start for a while. We're not going to win the league by January.

"We've got to hang on to the coat tails and then we'll come good at the end and be strong, when the team gels, touch wood with no injuries or suspensions."

One of those to leave was top scorer and fan favourite Adebayo Akinfenwa, who was released and subsequently joined Gillingham.

Boothroyd added: "One of the supporters asked me 'who are we bringing in to replace Bayo?'

"We've already got better players than Bayo. I love Bayo, he's brilliant. But for what we need to do and where we need to score, we can't rely on one man - I've been saying that for 18 months."