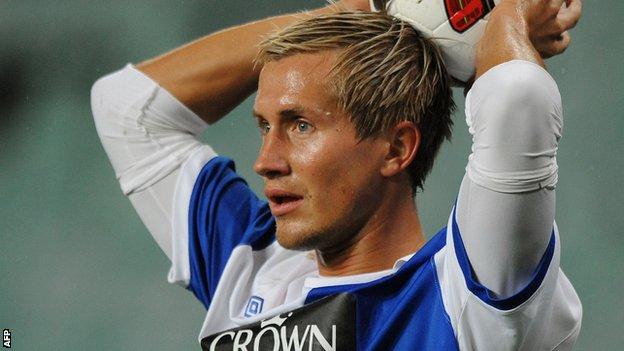 Norwegian international Morten Gamst Pedersen has been told he can leave Blackburn Rovers on a free transfer after nine years at the club.

Blackburn's longest-serving player, 31, has not been involved in either of the club's matches this season.

The midfielder would prefer to stay at Ewood Park but wants regular football.

"There is no big issue. Morten is a top, top professional who wants to play football," Blackburn chief executive Derek Shaw said.

"He has found himself out of the team and we will do anything we can to assist a move. If a move comes along we won't stand in his way.

"You don't meet people as professional as Morten too often and he is a man who wants to play football."

Blackburn are attempting to reduce their wage bill to fall in line with the Football League's financial fair play regulations.

They have already cancelled the contract of former Fulham midfielder Danny Murphy this summer and it is understood Pedersen fears his relatively high wage bill has pushed him out of favour at Ewood Park.

Pedersen is still under contract until next summer and remains a Blackburn player until a new club are found, however no move is currently lined up.

Pedersen, a £1.5m signing from Tromso in 2004, was linked with a move back to the top flight following Blackburn's relegation in May 2012, but insisted he wanted to help them return to the Premier League.

He has made 306 appearances for the club and has made more than 30 appearances in each of his last eight seasons.