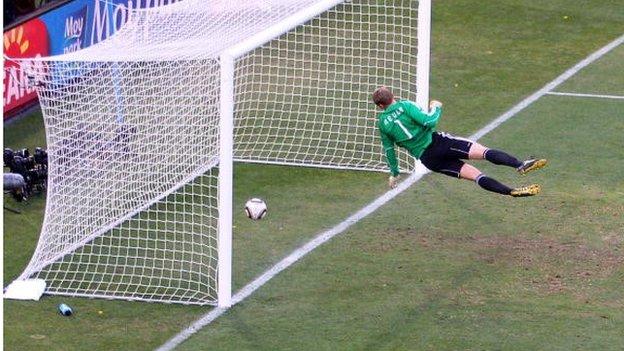 Jorge Larrionda is the forgotten man of goal-line technology.

As the referee in England's 2010 World Cup match against Germany, the Uruguayan's decision to wave "play on" after Frank Lampard's shot had clearly crossed the line opened the door to the technology's long-delayed introduction.

Our broadcast partners are very keen to show goal-line technology. It was a big part of the decision

Embarrassed by the failure to award a goal, football's world governing body Fifa quickly dropped its long-standing opposition, with the organisation's president Sepp Blatter reflecting last year: "I have to say 'thank you, Lampard'. I was completely down in South Africa when I saw that. It really shocked me."

The Premier League has been swift to take advantage and will, when the season starts, become the first league to adopt a "goal decision system", as the top flight's governing body insists on calling it.

The FA is also getting involved, with Wembley stadium now ready to use the Hawk-Eye technology in time for this weekend's Community Shield between Manchester United and Wigan.

Speaking at the Premier League launch of the new system, FA general secretary Alex Horne said: "This is one of the biggest changes that has happened in the 150 years since we conceived the laws of the game."

Such a momentous change required a rigorous testing regime. The four companies eventually licensed by Fifa to provide the technology have had to demonstrate to independent testing authorities that the system works.

After being introduced at the Fifa Club World Cup last December, and then used at this summer's Confederations Cup, the Premier League is ready to roll it out for the new season.

Officials claim 31 goal-line incidents in the Premier League would have benefited from the 14 tracking cameras that will now monitor the ball during every game. Technology is not infallible, however, as the controversies of this summer's Ashes series have shown, and Hawk-Eye's founder has entered the row, claiming cricket's authorities failed to conduct the necessary tests.

But those behind the Hawk-Eye system are confident that after the rigorous procedure Fifa instigated, and the strict technical criteria laid down by the governing body, there will be no similar problems for football.

"Our part of cricket has been very reliable, the lbw part - there has been no controversy over that," said Dr Paul Hawkins, the founder of Hawk-Eye.

"Equally our tennis system, which is used at 70 events around the world, is very accurate and reliable.

"The players and officials have a lot of confidence in that. So it's that track record that people need to be looking at."

American football introduced review technology back in 1986 and followed up by allowing teams to challenge on-field calls in 1999.

In all these sports the element of review has added an extra sense of drama and even theatre to proceedings. The pause, and sometimes prolonged delay, before a decision is now considered part of the game and has been embraced by fans and participants alike.

Football, however, is different.

The speed, fluidity and unpredictability of the game are factors Fifa wants to preserve. It is for these reasons that it insisted a decision must be relayed to the referee within one second of the ball crossing the line.

The option for broadcasters to show the footage on TV and on big screens at stadiums will, it is hoped, add that same drama other sports now possess.

In many respects, the speed with which the Premier League has adopted the technology can be viewed through this prism.

Certainly there is a desire to eliminate miscarriages of football justice. But then there is also the estimated £5.5bn TV deal for the next three seasons - drawn from domestic and foreign rights sales - that stands as a testament to the popularity of the Premier League around the world.

Hawk-Eye allows the Premier League to differentiate its product with the hope that innovation will help keep its competitive advantage over rivals such as Spain's La Liga and the German Bundesliga.

"Our broadcast partners are very keen to show it," said Richard Scudamore, chief executive of the Premier League.

"It was a big part of the decision and it's where Hawk-Eye were very good at understanding the needs of broadcasters and the need to show it in the stadium."

"They've done that with tennis. That was one of the big clinchers with why we went with them."

After decades in which the game evolved at a glacial pace, the sport has accepted it must change.

The revolution, it seems, will be televised.