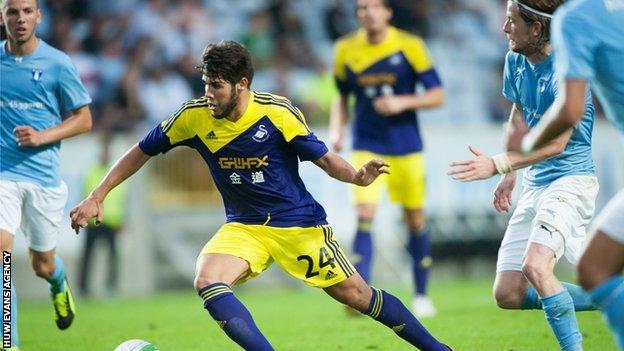 Swansea manager Michael Laudrup is targeting a place in the Europa League group stages after his side saw off Malmo to reach the play-off round.

Swansea fought out to advance 4-0 on aggregate, having

"Now we've got into the play-off but we want to go into the group stage and we will see [on Friday] who we are playing against," Laudrup said.

"We will be seeded so hopefully we will not face one of the big teams."

We are through and in these two games most of the squad played 90 minutes, that's important as well before the start of the Premier League season

Swansea will avoid fellow seeds from the third qualifying round such as Stuttgart, Seville, Udinese and Standard Liege when the draw takes place in Nyon, Switzerland on Friday.

The Welsh club will also avoid a host of potentially tricky opponents entering the Europa League at the the play-off round, including Premier League rivals Tottenham, Dynamo Kiev, Fiorentina and Spartak Moscow.

"I am satisfied overall," said Laudrup, of his team's second-leg showing. "We knew we were almost there and I think it was a professional performance.

"They had a good chance in the opening moments but we dominated the game and had good opportunities. We have two clean sheets and have not given our opponent many chances.

"If we want to find something negative, we did not play that well offensively. We have to do much better in that area but when you play away you can't always dominate and clean sheets are very important.

"We are through and in these two games most of the squad played 90 minutes, that's important as well before the start of the Premier League season."

Before they return to European action, Swansea open their Premier League campaign on 17 August against Manchester United at the Liberty Stadium.

"It's a huge game to start off with but we play at home and there's not so much pressure - most of the pressure is on the champions," Laudrup added.