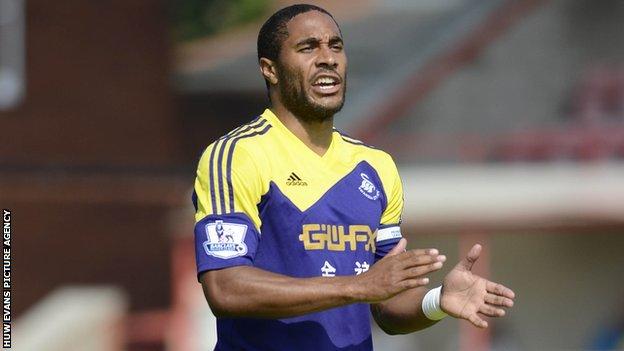 Swansea City captain Ashley Williams marked their as a success on two fronts.

The stalemate, coupled with their secured a place in the play-off round.

And Williams believes it was perfect preparation for their Premier League opener with Manchester United.

"It was a good night for us, especially going into the Manchester United game. Playing on their home pitch was tougher than last week," said the defender.

"Nil-nil away from home is always a good result, especially in our first away game in Europe.

"Not to concede any goals was good and we had a few chances to score.

"That's what we're talking about, being more ruthless and trying to finish off teams.

"They were flying in with a few tackles and so were we. It just shows what it means to the players.

"We had a great away following and wanted to show to them that we were playing to win the tie - even though we were 4-0 up."

Swansea manager Michael Laudrup was able to make seven changes to his starting XI in Sweden from the side that dominated Malmo at the Liberty Stadium last week.

The majority of Swansea's squad got a good chunk of competitive football under their belts before the domestic campaign, which starts at the Liberty Stadium against champions Manchester United on 17 August.

"First and foremost it was good that we had put ourselves in a position where the gaffer could make changes. It's good he has the players to do that," Williams added.

"A lot of people needed game time and before the start of the season we need everyone to be ready, because you never know when someone will be called on."

Swansea will be seeded when the draw for the play-off round takes place in Nyon on Friday, so they will avoid fellow seeds from the third qualifying round such as Stuttgart, Seville, Udinese and Standard Liege

The Welsh club will also avoid a host of potentially tricky opponents that enter the Europa League at the the play-off round, including Premier League rivals Tottenham, Dynamo Kiev, Fiorentina and Spartak Moscow.