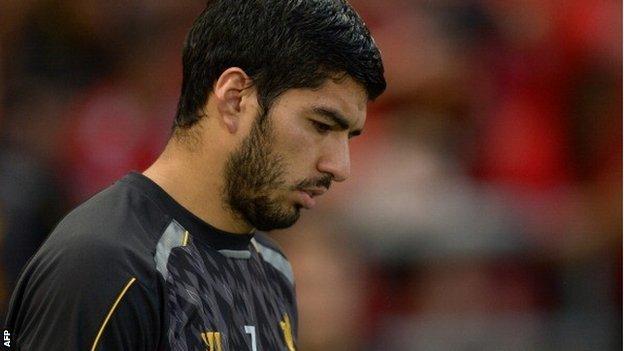 Liverpool striker Luis Suarez will not be sold this summer at any cost, the club's owner John W Henry has said.

Suarez, 26, has been told to train alone after seeking a move to Arsenal.

"We are not going to sell Luis," Henry told various newspapers. "It's very important [not to sell to a rival], but especially for Liverpool because we're not in Europe this year."

He said it would be "ludicrous" to sell to a rival, adding he was "unequivocal" they would not sell to Arsenal.

The Gunners have had two offers turned down by the Reds, the latest of which was a pound over £40m.

Suarez thought this offer would trigger his release, but Professional Footballers' Association chief executive Gordon Taylor says this is not the case.

With less than four weeks to go before the transfer window closes, Henry is adamant any offers from overseas clubs will also be rejected.

"He won't be sold even if a foreign club comes in because we do not have time to sign a suitable replacement," he said.

"It's not about finances. So late in the window... we can't replace him. So for football reasons we can't sell, and especially to Arsenal."

The American revealed that Suarez and his agent Pere Guardiola were informed any deal for him to leave Anfield would have to be completed early in the transfer window - giving manager Brendan Rodgers sufficient time to reinvest the fee.

"We made that clear early-on," added Henry. "I think the issue has been resolved now. We have said 'no'. Luis will be a Liverpool player on 3 September [the day after the transfer window closes]."

Rodgers has said the player has shown "total disrespect" for Liverpool and, when queried whether he envisaged the Uruguay international turning out for the Reds again, Henry replied: "That's going to be between the manager and player.

"The manager is upset, as he should be, the supporters are upset, Luis is, but that's going to be between those two and his team-mates. We need Luis. Hopefully this will pass."