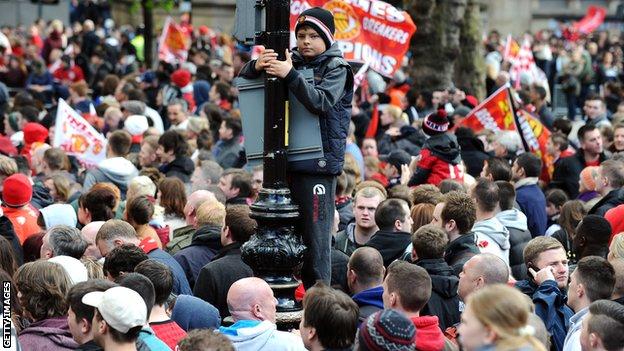 Premier League fans face being priced out of the game before they reach the turnstiles, says a campaign group.

The Campaign for Better Transport (CBT) has called on clubs to help their supporters tackle the "spiralling cost" of travelling to matches.

A CBT survey revealed 23% of football fans spend more on travel than a match ticket.

"Fans want something cheaper and better than traffic jams and overpriced car parking," the group said.

Findings from Campaign for Better Transport's study include:

A football railcard, offering reduced fares for train travel, is one of the options the CBT puts forward to reduce costs.

Its findings suggest Premier League champions Manchester United appear to have conducted "no active travel planning with Trafford Council since it applied for expansion in 2004".

And the survey draws attention to Norwich City's website promoting car travel and parking before public transport or other alternatives - despite Carrow Road sitting close to a mainline railway station.

It also highlighted Premier League clubs who have launched travel initiatives for their fans.

Newcastle United's Magpie Mover gives season ticket holders match-day use of public transport across Tyne and Wear for £10 for the season. A similar, though more expensive, option is available to Sunderland fans.

Arsenal have worked with Transport for London and others in an attempt to help fans leave their cars at home, with the percentage of supporters arriving by car falling from 30% to 10% since they moved to the Emirates Stadium in 2006.

Stoke, meanwhile, announced last month they will offer supporters free coach travel to all 19 of their Premier League away games this season.

CBT has written to the chief executives of all 20 Premier League clubs stating the average fan spends £55 on match day, with £13 going on travel, while train travellers spend £74, £26 on getting to the game.

"Our research found that, up and down the country, many fans spend as much money on getting to the ground as they do on buying a ticket for the game," said CBT sustainable transport campaigner Sian Berry.

"Clubs need to learn from other countries and work with train and bus companies to make travelling to the game an affordable part of the match-day experience.

"As well as saving fans a fortune, a few simple steps would also make football more accessible and could help to increase attendances."