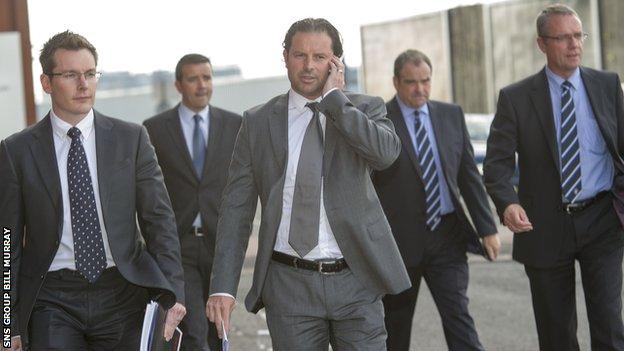 Rangers supporters' groups have called for Charles Green to be stripped of his consultancy role at the club.

They say Mather told them he would convene a board meeting within seven days, at which former chief executive Green's position will be considered.

Club funds have shrunk to £10m despite a stock market flotation and more than 30,000 season-ticket sales.

In December, the initial public offering (IPO) fundraising on the Stock Exchange brought £22m into Rangers.

Green quit as chief executive in April before being cleared by an internal investigation over claims of close links with former owner Craig Whyte during last year's takeover.

"I think it can only be a good thing when you hear the opinions of the people who support you. Selling 34,000 season tickets again is just outrageous and I think the very least we can do is hear what they've got to say. Me, I've just got to support the board and support the decisions they make in hopefully moving the club forward. I just hope something gets sorted out sooner rather than later. If there's no need to go to an EGM and things can get sorted out, then fantastic."

He returned to the club as a consultant last week, sparking a chain of events resulting in a public spat with manager Ally McCoist and chairman Walter Smith resigning on Monday.

"We welcome the news that Craig Mather will convene a board meeting within seven days to consider the future of Charles Green.

"If the board reflect the mood of the room at the fans' meeting, then Mr Green will be stripped of his consultancy role."

On his return to Ibrox, Green said McCoist had to win a cup as well as League One this season and said former manager Smith had described last season's side as "the worst Rangers team you have ever seen".

It added: "We are glad that Mr Mather has committed to talking to [Rangers shareholder] Jim McColl and his colleagues. The issues facing the club are very clear and urgent - with good will they can be resolved without resort to an EGM."

And that's something McCoist also wants to avoid.

"I just hope something gets sorted out sooner rather than later." he said.

"If there's no need to go to an EGM and things can get sorted out, then fantastic. "If it has got to go to an EGM, then these are all decisions which are outside my control.

"I can't have an effect on them so there is no real point in me worrying about them."