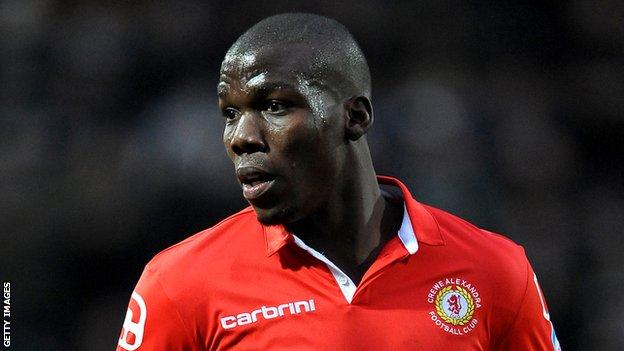 Crewe striker Mathias Pogba will be out for between three to four months following surgery on his right knee.

The 22-year-old, who scored 16 goals in 41 games for the Alex last term, damaged his knee during their pre-season friendly with Manchester United.

After seeing a consultant, the Guinea forward is set for a lengthy absence.

"The operation was the right thing to do as it enabled the surgeon to find out what trauma went on," boss Steve Davis told BBC Radio Stoke.

"You always want your top scorer playing. If you take any top goalscorer out of any team, it's always a huge blow to lose them.

"We're gutted for Mathias, and he's a difficult one to fill in because of what he gave us last season in terms of goals, power and strength. We'll have to paper it over with what we've got.

"Obviously Vadaine [Oliver] gives us that presence and he's getting himself fitter, so he could fill in while Mathias is out.

"I don't intend to bring anyone in unless I really have to."