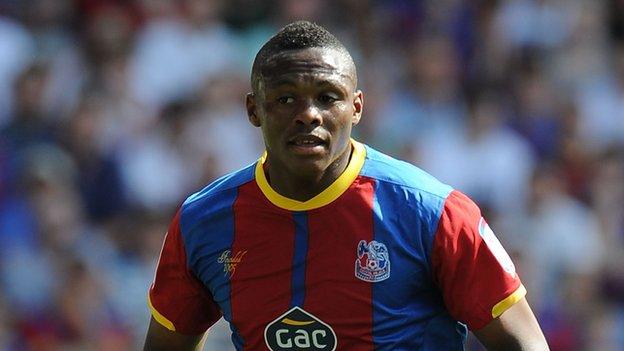 South African midfielder Kagisho Dikgacoi is relishing the opportunity to prove himself in the Premier League with newly-promoted Crystal Palace.

Dikgacoi left Fulham in 2011, having endured two frustrating seasons at Craven Cottage after joining from South African side Golden Arrows.

At the time Palace had just avoided relegation from the Championship but a loan spell at Selhurst Park, under then-manager Dougie Freedman, convinced the Bafana Bafana regular to make his switch permanent.

Dikgacoi played an integral part in last season's promotion campaign, even though he was forced off injured during the first half of the play-off final victory over Watford at Wembley.

Now 28, he admits he has some unfinished business in the Premier League.

"Definitely. I only played 13 or 14 games for Fulham and for me that wasn't enough," Dikgacoi told BBC Sport.

"I wanted to play more and coming to Palace has allowed me to do that. I told myself that going to the Championship would give me experience of English football and that has paid off in the end because we got promoted. Now I'm really buzzing to be back."

Palace were expected to be relegation candidates last season but confounded the odds to finish fifth, before beating arch-rivals Brighton in the play-off semi-finals on their way to Wembley.

Ian Holloway's side will again start as favourites to go down when they kick off against Tottenham at Selhurst Park, despite breaking the club's record transfer fee by signing Dwight Gayle from Peterborough for £4.5m over the summer and Spanish midfielder Jose Campana from Sevilla.

But Dikgacoi expects Palace to maintain the momentum from last season to give themselves a fighting a chance of survival.

"We always believed that we were going to get promoted because we knew what we were capable of," he said.

"It was a great season for us although obviously it was disappointing for me to get injured in the final.

"Everyone wrote us off all year but the confidence among the players gave us a chance. It's the same again for this season - everyone is saying we are candidates for relegation but that doesn't bother us at all. It's going to be amazing for everyone at the club. I just cannot wait."

Having missed part of pre-season as he recovered from his injury, Dikgacoi is now racing against time to prove his fitness for the opening day of the season.

But he is expected to be ready when Bafana Bafana attempt to book a place in the World Cup play-offs on 6 September.

South Africa have been given a second bite of the cherry after Ethiopia were deducted three points for fielding an ineligible player.

A defeat for Ethiopia against Central African Republic would allow South Africa to make it through with a victory over Botswana in Durban and Dikgacoi still believes they can make it to Brazil.

"We just have to focus on our game against Botswana and not worry about Ethiopia. If we go into the game with the right frame of mind then anything can happen," he said.