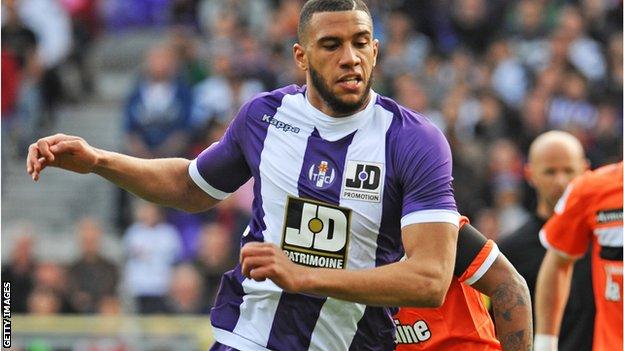 Midfielder Etienne Capoue has ended Cardiff City's hopes for signing him by agreeing a transfer to Tottenham from Toulouse.

Cardiff City had a £9m bid for the 25-year-old France international accepted by his club Toulouse at the end of July.

But Capoue was undergoing a medical at Spurs on Friday.

"We had a bid accepted, but as far as I am aware he has gone to Spurs," said Mackay.

Capoue....we had a bid accepted, but as far as I am aware he has gone to Spurs

Mackay had admitted negotiations to agree personal terms had been "delicate" with Capoue, but the Premier League new boys have missed out on luring him to the Welsh capital.

Capoue, who has won five caps for France, can also play at centre-back.

Capoue was thought to favour a move to Spain, but Atletico Madrid had failed to match Toulouse's valuation for the five-time capped defensive midfielder, while Spurs, Arsenal, Liverpool and Everton have all been linked with the player.

He is the second player to turn down a move to the Championship winners, with Blackpool midfielder Tom Ince rejecting a move to the Welsh club after a price had been agreed with his club in July.

The England Under-21 winger held talks with the newly-promoted Premier League side, but decided to stay at Bloomfield Road for family reasons.

Cardiff broke their transfer record twice in July with the signing of Steven Caulker from Spurs for a reported £8m following the arrival of striker Andrea Cornelius from FC Copenhagen for £7.5m.

Mackay dismissed the idea that Cardiff City were finding it difficult to lure players to the club.

"It is not any more difficult than it was last year, or the year before. You are trying to get the targets you want," said Mackay.

"Invariably, there is competition for the targets we want and sometimes club's don't want to sell. It was the same last year and we signed five (players) in the last week.

"We have brought 25 players into the football club in the last two years, so we are pretty well versed in the mechanics of how this works and the patience you have to have."